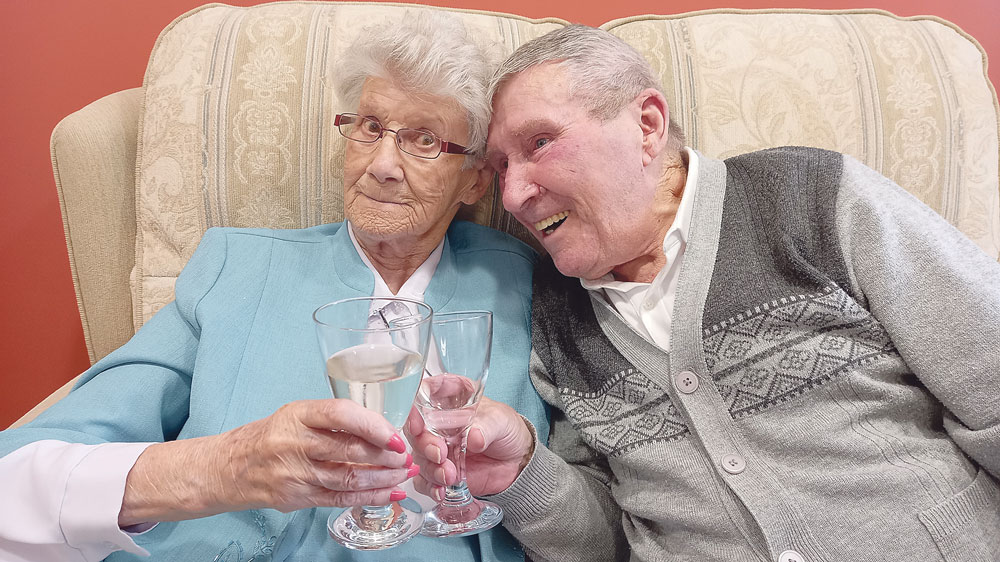 Best wishes to Patricia and Bernard – 71 years together

A COUPLE celebrated their 71st wedding anniversary at Maryfield Nursing Home in Chapelizod, during which, it was clear to see, the sparks from their enduring relationship are the same now as it was during their early courting days.

Bernard and Patricia Kavanagh, from Ballyfermot, first met on the floor of the Donnybrook CYS Club dance in 1950.

“We were about 18/19 and clicked, it was love at first sight, well love for me anyway,” said Bernard.

“I don’t believe in love,” quipped Patricia in her trademark faux stoic fashion.

Meeting the pair at the nursing home on Friday, they are slightly reluctant for an interview at the start, considering their hard-working modest nature, but as time goes on and the Prosecco sips increase, it turns out to be a thoroughly enjoyable hour.

The couple raised their four children (Bernard jr, Denise, Derek and Philip) on Blackditch Road, and have enjoyed a great life together, bouncing off each other’s wit and commitment.

They have “loads of grandkids”, so much so, they have “never seen half of them” according to Patricia, while Bernard says “the gas thing is they think they are all in the will, but it’s all going to the dog’s home”.

“When we got married, we lived on the Navan Road, then Kilmainham, then we moved to Colepark Green, but after seven years we had to move out and picked out a ‘newly wed’ house on Blackditch Road,” said Bernard.

Patricia, who grew up in Rathgar, concedes it was a big change to move to Ballyfermot, but one she grew to love.

“It was a big change, but the house (Blackditch Road) was big and the garden was beautiful,” she recalls. 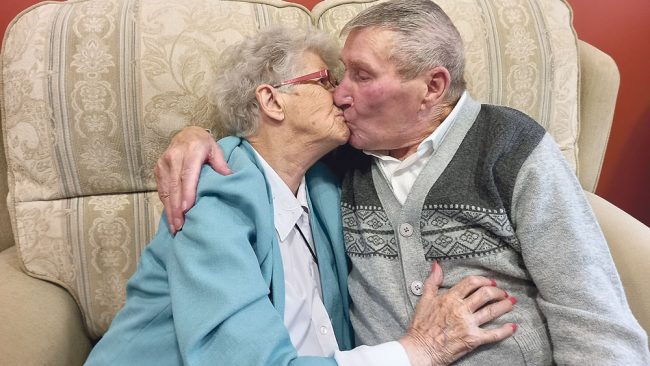 “They are lovely people in Ballyfermot. If you are sick, they’d be in to do your shopping and checking up on you. I lived in a posh area before, and people would want to know what your partner did, and all that baloney.”

“She gave us a lovely home, very proud,” said Bernard.

Both of them worked hard in their career, Bernard for a number of companies including Goodall’s on Distillery Road.

“Then they closed and I took a two-year voluntary redundancy at the age of 63.”

Meanwhile, Patricia did the books for publishers Browne and Nolan.

“I did the money for them, you had to be very careful,” she said.

For recreation Bernard played football with Grangegorman in the Leinster Senior League and with Wayside Celtic in Kilternan, while Patricia was a lover of ballroom dancing and singing.

Perhaps some top memories include their many holidays abroad, with Bernard mentioning Yugoslavia as his favourite “the food was brilliant”, and Patricia citing Blackpool as a place close to her heart.

“The amazing thing was when you went down to your dinner, there was one-hour free drinking.”

Patricia was the first one of the couple to move into Maryfield last year.

Bernard would visit her and wanting to be closer to his wife, eventually he managed to secure a space at Maryfield two months ago, with staff more than happy to facilitate their reunion.