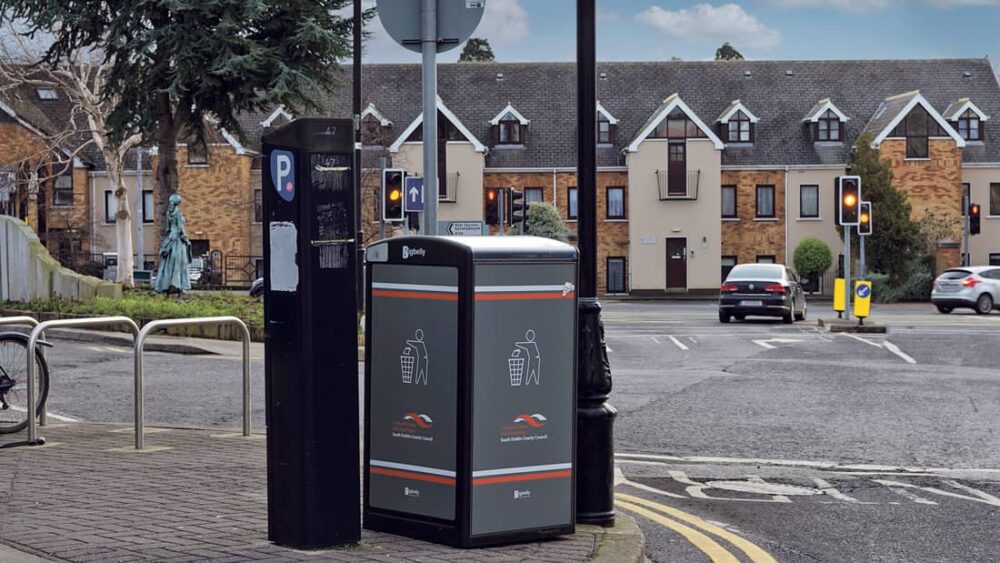 A PROPOSAL for the use of ‘Big Belly’ solar-powered litter bins in South Dublin County is considered “unviable from an economic perspective”, according to the council.

The smart technology in the bins runs on a rechargeable battery that is powered entirely by solar panels.

The smart technology prompts an email to be sent to the relevant waste management division informing them that it is ready for emptying.

The bins also have a compactor that will crush rubbish, which means they can hold significantly more waste than ordinary litter bins.

In November 2019, the council ran a limited trial of the solar-powered smart bins in which eight standard litter bins in Rathfarnham were replaced with the smart bins.

The replaced bins were located in Rathfarnham Village, the Rathfarnham Castle playground and Rosemount Shopping Centre.

Independent councillor Alan Edge previously described the trial as “very successful” but noted that the cost of the bins could be a prohibitive factor.

The topic of rolling out the bins around the county was raised at this month’s South Dublin County Council meeting by Fianna Fáil councillor Yvonne Collins.

Cllr Collins asked for details on a cost/benefit analysis on the project that was carried out by the council.

In response, the local authority provided details of a ten-year cost/benefit analysis that was carried out last year, about a proposal to install 400 of the solar-power bins around the county.

The council’s estimated figures include total additional costs over a ten-year period reaching €4.775m, to include telemetry costs, bin maintenance and repair, and repayments on capital expenditure of €2.5m.

In terms of savings, the council found that over a ten-year period €2.997m in savings – including advertising revenue – would be made.

“Total costs over the ten-year period exceed total savings plus income by €1.778m which make the proposal unviable from an economic perspective,” stated the council.

The council noted that the figures given here for potential income have been estimated based on information provided by the supplier of the bins for the Rathfarnham trial.

“The information provided related to other similar contracts that they were engaged in, however there is no certainty that this level of income is achievable and could be realised here,” it said.