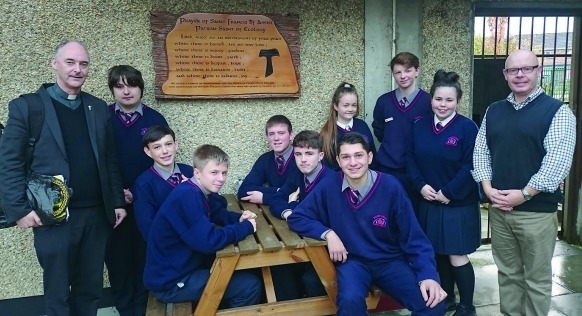 JOBSTOWN students recently expressed solidarity with their peers who are members of the Travelling community by creating a Book of Condolences following the Carrickmines tragedy.

Speaking to The Echo, school chaplain, Patrick Doyle, said that the Book of Condolences symbolised the school’s solidarity with students who are members of the Travelling people, with around 35 Traveller students studying at Mount Seskin.

The book was also the school’s way of offering its sympathies to the families and friends of those who lost their lives in the Carrickmines tragedy and also to Father Derek Farrell, who is the chaplain of the Parish of the Travelling People.

Father Derek visited Mount Seskin last week and was presented with the Book of Condolences.

School Chaplain Patrick Doyle said: “While expressing our solidarity, creating the book of condolences gave us the opportunity to invite Father Derek to the school, and alongside collecting the book he spoke to the students about himself, his role as chaplain, the Traveller culture and his own faith.

“The students did a brilliant job and they also compassionately decorated ten pages to highlight the names of each person who sadly lost their lives in the fire at Carrickmines.”