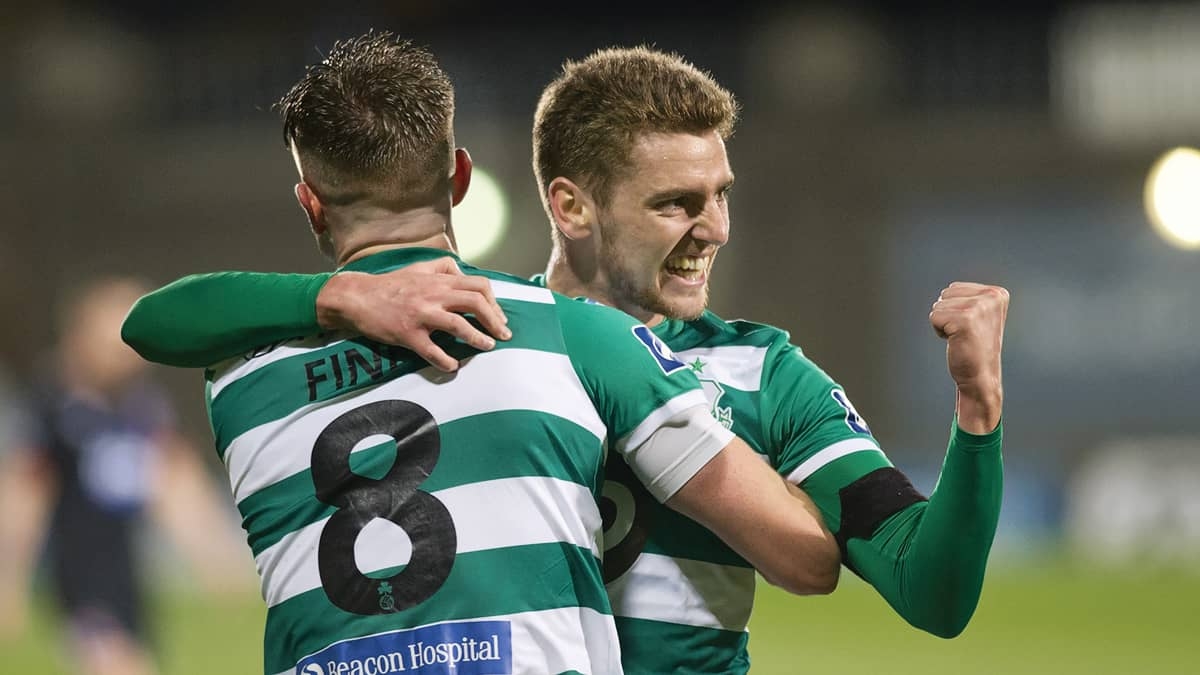 Bradley calling on his champions to complete the season unbeaten

NOW THAT their 18th League of Ireland Premier Division title has been officially wrapped up, Shamrock Rovers manager Stephen Bradley is challenging his side to finish out the season unbeaten.

Rovers have dropped just four points so far in this year’s Premier Division campaign and have four games remaining.  There is also the small matter of the Tallaght outfit’s defence of the FAI Cup.

Dylan Watts celebrates his goal in what was one of the games of the season when Shamrock Rovers beat Dundalk in front of a packed Tallaght Stadium back in February (Image: Paddy Barrett)

Having reclaimed the latter following a 32-year -long wait courtesy of a penalty shootout victory against Dundalk last November, they will be hell-bent on completing a domestic double.

“100 per cent we want to defend our trophy and we want to go unbeaten” insisted Bradley. “That was our target when we came back. We looked at it and the 18-game season gave us no margin for error.

It meant that we couldn’t blink because the short amount of games didn’t allow you to slip up.

“That brings its own pressure so we had to be really on it. We definitely want to go and defend our Cup. The great teams of this club are always remembered for winning doubles and back-to-back titles.

If we want to be talked about or regarded as one of them you’ve got to go and deliver. I know this group has it in them.”

Such is the confidence Bradley has in his players, it was actually in defeat that he realised Rovers were on the right track. Shortly after last year’s mid-season break, a Sean Gannon goal handed eventual champions Dundalk a 1-0 win in a league meeting at Tallaght Stadium.

As damaging as this result was to the Hoops’ title aspirations, the level of the performance provided great assurance to Bradley and his most trusted lieutenants – assistant manager Glenn Cronin and sporting director Stephen McPhail.

“We were so dominant in that game, in every aspect. We lost the game but when we went home myself, Stephen and Glenn rang each other after watching the game back. The three of us had the exact same message.

Without speaking afterwards, we felt that was a real turning point for the group.

“It was actually the first time we’d gone and controlled, and dominated, the game in that fashion in a big, big game. Even though we’d lost so it didn’t make an impact. But for me, that was a big turning point.”

The circumstances surrounding Rovers’ latest league triumph (their first since 2011) were somewhat peculiar. Rather than sealing the deal on the pitch themselves, a 2-0 reversal for arch rivals Bohemians at home to Finn Harps last Saturday means they are guaranteed top honours with four games still to play.

Current Covid-19 restrictions ensured this success could not be celebrated by the Hoops players in a traditional manner.

Yet Bradley – a two-time league winner in his playing days – was pleased to be able to mark this occasion in the company of his family, who have been with him through thick and thin in recent years.

“That was nice, to sit down the kids and explain it to them. What’s happened. Have a glass of wine with my wife. That was nice,” Bradley added.

While the title was secured without Rovers having to kick a ball in the last three weeks, nothing can be taken away fom the newly crowned champions who have proven most consistent in what has been a tumultuous year for sport and one that resulted in a shortened Airtricity League season.

The Hoops served up some huge results along the way, starting with a 1-0 victory away to Bohemians at the outset of the season.

Among the other telling moments for the Tallaght side was a thrilling 3-2 victory over defending champions Dundalk, Jack Byrne firing home an 83rd minute winner in front of more than 7500 spectators in Tallaght on the night.

The Covid-19 crises threw everything into disarray, but Bradley’s troops remained completely focused on the task at hand when the season eventually got back up an running.

A nailbiting night in the Brandywell in August saw them battle back from a goal down at the halftime break to snatch the spoils by way of a Colm Horgan own goal and a Roberto Lopes winner in the 81st minute.

And while they did suffer a slight wobble with two consecutive scoreless draws against St Patrick’s Athletic and Shelbourne they bounced back with another narrow victory over Bohs and never looked back, winning their remaining games that included a 6-1 demolition of Waterford and a 4-0 trouncing on Dundalk in Oriel Park.