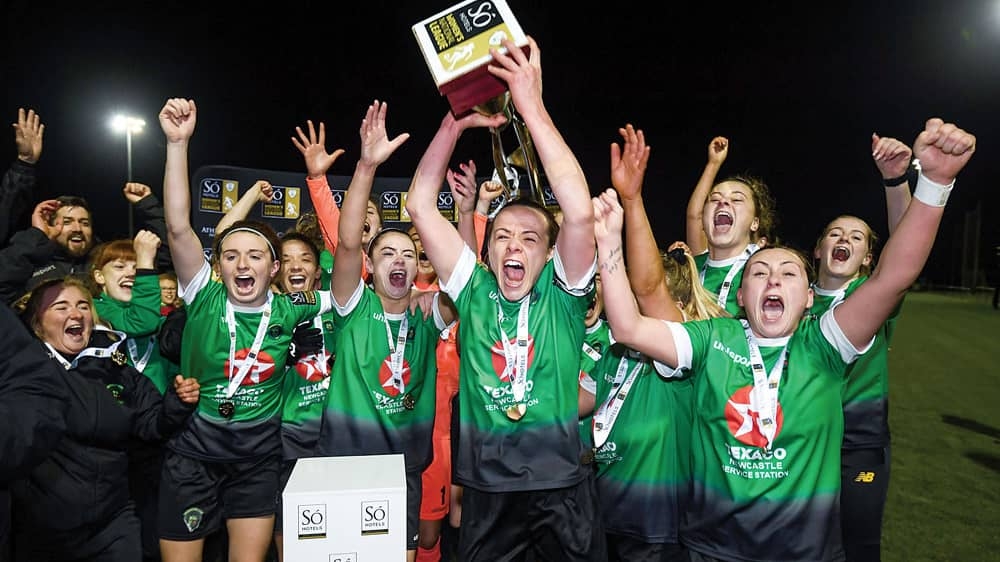 “We’ve nothing to lose”

PEAMOUNT United senior women’s team manager James O’Callaghan is looking forward to leading his team into the UEFA Women’s Champions League against Glasgow City next week and insists his side have nothing to lose.

The Newcastle outfit will be underdogs heading into the first round knockout tie against the Scottish Premier League winners in Scotland, but, while in no doubt about the huge challenge the Peas’ face, O’Callaghan believes they are under no pressure.

“They [Glasgow] are the Number One seeds. They reached the quarter finals of the Champions League last year and they’ve won their league for the past 13 years in a row I think.

“It’s going to be a big challenge. It’s like David and Goliath, but we’ve got nothing to lose. It’s a one-off match and on any given day, anything can happen.

“It’s an exciting match and the players are really happy with the draw. We really want to do well for both Peamount and the National League. We want to put in a very good performance.

“We’ve got players with good international experience and we’ve also got a great group of young players coming through.

“We’ll be doing our analysis on the opposition so that the girls are prepared. The club is putting in a lot of work so that we’ll be ready for the challenge” he stressed.

On the home front, Peamount have mounted a very impressive defence of their National League crown with a 3-0 reversal away to Wexford the only blip on their campaign so far.

Indeed the team has won all eight of their other games to go top of the table while they also have an FAI Cup semi final date against holders Wexford to look forward to after their Champions League outing.

“We’ve been really happy with our home form” said O’Callaghan.

“We got a great three points away to Galway which is a very difficult place to go.

“That’s kept us at the top of the table, but Shelbourne are only two points behind us and Wexford, Cork and Galway are all still in the mix.

“After the Champions League match, we have to go to Wexford for the Cup semi finals and then we have three more league games.

“But these are the stages you want to be in and it’s going to be a very exciting two months for the team.”

Peamount will be back out in National League action on November 14 when they play host to Cork City in Greenogue after which they will compete their campaign with games at home to Shels on November 21 and away to Wexford on December 5.