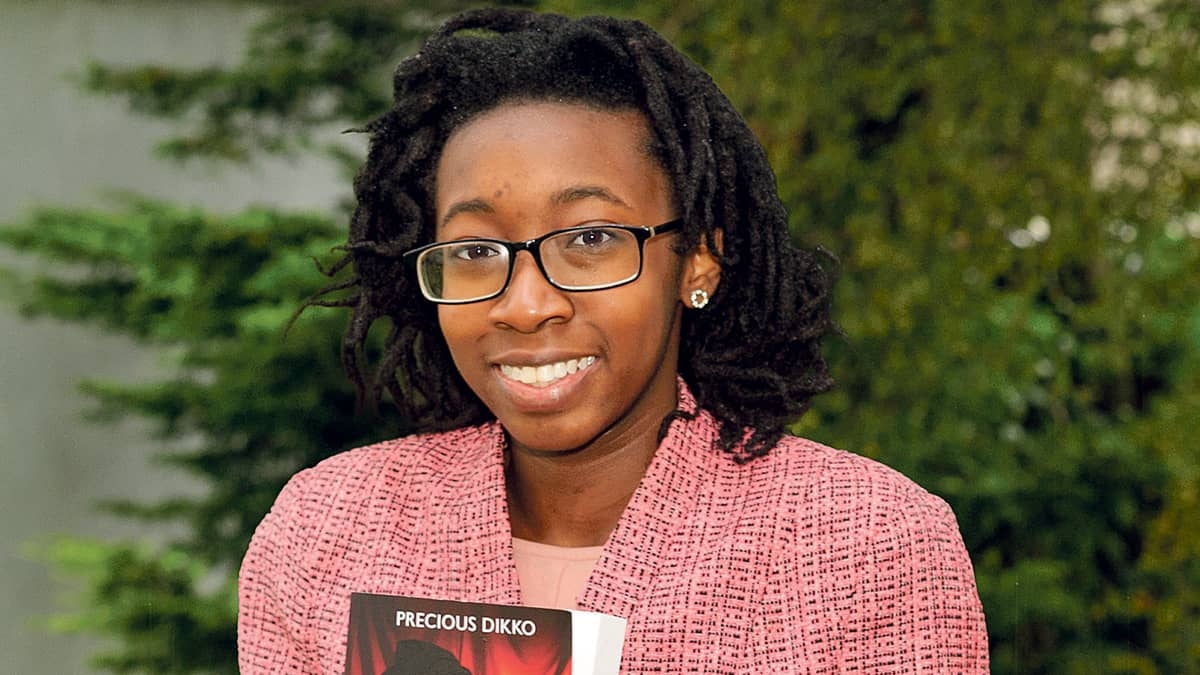 To Catch a Rebel: Debut novel by Precious Dikko

A princess who has spent ten years in hiding is taken back to her home village of Xavia after the death of her father, the king, as she is heir to the throne – but she finds that life in the palace isn’t as safe as she thought it would be.

Princess Imotenya Aria Accra is the main protagonist of ‘To Catch a Rebel’, the debut novel by 19-year-old Lucan woman Precious Dikko.

Precious Dikko, author of To Catch a Rebel

The novel draws inspiration from Precious’s time spent living in Nigeria and London, and is influenced by the box office hit ‘Black Panther’ and the historical television drama series ‘Victoria’.

Precious took some time out to speak to her local paper about her first foray into writing when she was a child, how living in three different countries across two continents influenced her writing, and the impact she hopes ‘To Catch a Rebel’ will have on readers.

You wrote your first book at nine-years-old. What was it about?

The first book I wrote was called ‘How to run’. It was literally that – a six-chapter book on how to prepare for going for a run.

I was really into athletics when I was nine and I thought I could write a book about it. It was my uncle that encouraged me to write it, so I wouldn’t be bored.

Did your passion for writing ever wane in the intervening years since you wrote ‘How to Run’, or has it been fairly consistent?

I think it never waned. I always thought of it as a hobby. I would always write stories starring my toys, and then poetry and songs as I grew older, but it wasn’t until I got to third year in secondary school that I thought that I could write for a living.

You’ve lived in three different countries across two continents, how did those experiences influence your writing?

Living abroad really influenced my writing. Firstly, because the country of Xavia is based on Nigeria, where I lived for two years and it’s where my family is from.

I learned a great deal about my family and just saw another way of life, and has really influenced the person I am today.

I also lived in London, which is where I really developed my writing, because that was when I actively tried to find something that was worth publishing someday.

I also wrote as a coping mechanism, because London was such a fast-paced lifestyle that I was not used to as a twelve-year-old.

Writing made me feel less alone.

What inspired you to write ‘To Catch a Rebel’?

‘To Catch a Rebel’ was inspired by the influx of young adult literature that was coming from women of colour, about girls of colour.

I was particularly inspired by Tomi Adeyemi’s ‘Children of Blood and Bone’ – a Nigeria-based fantasy which is now a bestseller. I thought if she could do it, so could I.

The plot of ‘To Catch a Rebel’ was inspired by the Marvel movie ‘Black Panther’ and the TV series ‘Victoria’, about Queen Victoria when she was young.

They’re both very different genres but the concept, like ‘To Catch a Rebel’, is the same – a young heir trying to prove themselves. It’s something all of us can relate to.

What was it like when you first saw the book in print?

When I first held my novel in my hand, it was a dream come true. I couldn’t believe it, until my friends who had bought the book sent me pictures of it in their houses and I thought, ‘Something I wrote is in people’s houses’. It’s so surreal.

What impact do you hope ‘To Catch a Rebel’ will have on readers?

What I want people to get from the book would be a better understanding of themselves, and see that emotions are messy when you’re growing up, but that they’re so much more capable than they think.

And for young Black girls especially, to see themselves in a story, which they may have felt had no place for them except on the sidelines.

Do you have any advice for budding writers who want to take the leap and write a novel?

My advice would be to get started, and once you do, continue. It can be daunting to look at a blank page, but don’t think, ‘How will I fill it?’. Think, ‘Where do I want to go and how do I want to get there?’ It’s much easier that way.

‘To Catch a Rebel’ is out now via Olympia Publishers, and can be purchased in Waterstones and on Amazon in eBook and paperback formats.

NEWER POSTEcho Sport Replay: Nelson looks back on the road that led Ballyboden to All-Ireland glory
OLDER POST“We’ve nothing to lose”