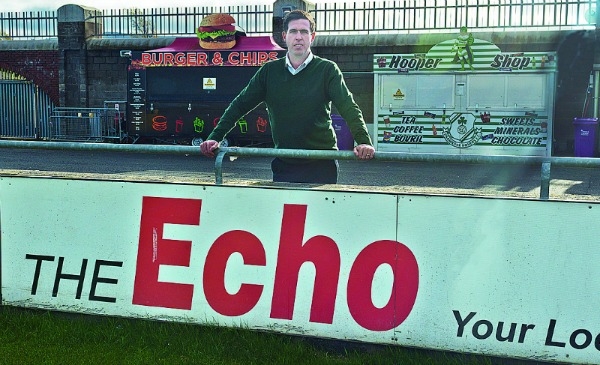 Bradley relishing challenge with the Hoops

NEWLY-confirmed Sham-rock Rovers Head Coach Stephen Bradley is champing at the bit ahead of next season’s campaign.

The Tallaght man, who took over the post in a caretaker capacity following the dismissal of Pat Fenlon in July, insists he has learned so much from his few months in charge and is delighted at getting the opportunity to rectify the errors he may have made last season.

“I have made some mistakes [last season]” conceded Bradley. “I know I did. That got to me and I want to put it right.

“That is one of the things that went through my mind, I have the chance to rectify my mistakes.

“I think people on the outside were thinking it’s definitely going to happen [Bradley’s appointment as Head Coach], but at a point, I was going back to the academy.

“I know the club have talked to numerous mana-gers from here and abroad, I’m delighted” he said.

Bradley led Rovers to a fourth place finish in the Premier Division and, with it, a return to the Europa League given that runners-up Cork City also raised the FAI Cup.

While results may well have been somewhat patch, Bradley has been credited with injecting some talented youth into the Rovers setup, the likes of Sean Boyd and Aaron Dobbs who have duly grasped their chance with both hands.

And Bradley believes the new additions who have and will be made to the team in the off-season will bolster their title quest in 2017.

“For me, the new signings are four leaders, four men. “They were and have been captains of their former clubs” Bradley pointed out.

“Roberto [Lopes] is a tough player. Anytime you play against him, you know you are in for a game. Danny [Devine] is a no nonsense centre back, which will add to the squad.

“Paul [Corry] for me was the best midfielder in the league before he went to England.

“I know he has had one or two problems, but he has been training with us for a long time now and has played a few closed door games and being excellent. He is a proper footballer.”

“The four players have improved the squad massively and we are looking to bring more players in. I think we are going to have a really good squad this season” he predicted.

Certainly the four new players are looking forward to donning the green and white of the club with Connolly saying “I can’t wait to get started. The club is one hundred percent going in the right direction.

“We are looking to do nothing else but win trophies, It’s exciting times here at Shamrock Rovers”.

Devine echoed these sentiments saying “I’m absolutely thrilled, I’m only living in Old Bawn, so I’m playing for my local team, It’s a dream come true. It will be only a five-minute walk to matches. You can’t beat that.

Paul Corry is relishing the new challenge, insisting “I know the league well; I know the players. I know I’m more than capable to play at this level and I’m hoping to have an impact on the team”

Lopes’ switch from arch rivals Bohs has certainly raised eyebrows, something he is not surprised with saying “The move is a bit controversial, but it is a decision I felt I had to make, from a personal point of view.

“I wanted to be a professional footballer all of my life. I know I would regret not making the move.

“It was not a decision I made lightly. I have been with Bohs six years and I have made a lot of friends. I have been thinking about the decision for months, but I feel it is the right time to move on” he added.

Only this week Rovers also announced a further two signings with full back Simon Madden staying on with the club and midfielder Darren Meenan penning a pre-contract that will see him make the move to Tallaght when his season at Dundalk concludes.

“I am delighted that Simon has agreed to stay on at the club” said Bradley.

“There was a lot of interest in him from other clubs so we are delighted that he sees his future at Shamrock Rovers. He is a great professional and I think is the best right back in the country.”

On Meenan he said “We have got one of the best wingers in the country.”