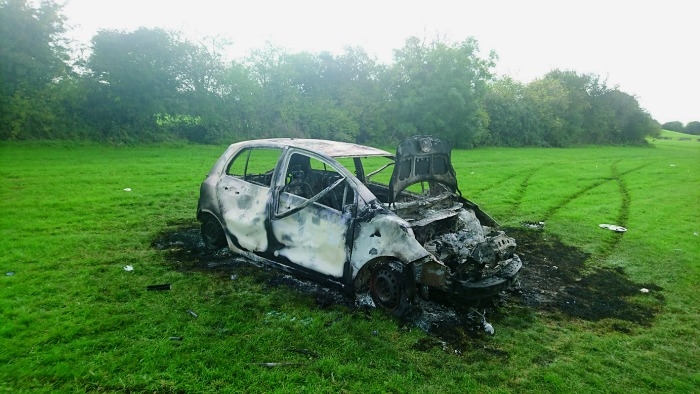 THE epidemic of burnt-out cars and illegal dumping in Bawnogue has got so bad, that bins are now being dumped into burnt-out cars.

Residents live in fear of thugs, so much so that many are afraid to use the park during the day, or be seen talking to local politicians.

Cllr Ó Broin said: “In recent weeks the situation in and near the park has deteriorated significantly. On an almost nightly basis cars are being stolen and then set alight.

“Last April I met with senior council management and urged them to establish a high-level task force to reclaim St Cuthbert’s Park. Such a forum must involve council, gardaí at superintendent level, elected representatives and the local community.

Unless we work together at a sufficiently senior level and take co-ordinated action, then this valuable public amenity will remain a no-go area for residents.”

Independent councillor Francis Timmons says it has got to the stage where “enough is enough.”

“I had the litter warden up in Bawnogue to see the extent of burnt-out cars and litter and I’m hopeful they will be removed,” he said.

“I have asked for a meeting with council officials, gardaí and elected representatives urgently.”

Sinn Féin councillor Mark Ward has urged authorities to crack down on the sale of motors.

“Lads are buying cheap cars for €100 or €150, and driving around without a care in the world,” said Cllr Ward.

“We need to be able to trace back car ownership, especially when it’s to under 18s, or when no NCT or insurance is involved.

It’s got so bad, people are dumping bins in burnt-out cars, and another car was set alight at the kissing gates in Melrose Park. Six or seven cars were burnt out in the last two weeks.

“I welcome the council issuing recent fines for dumping, which has also got out of hand in Bawnogue, but would urge residents to notify the litter warden if they notice any activity.”