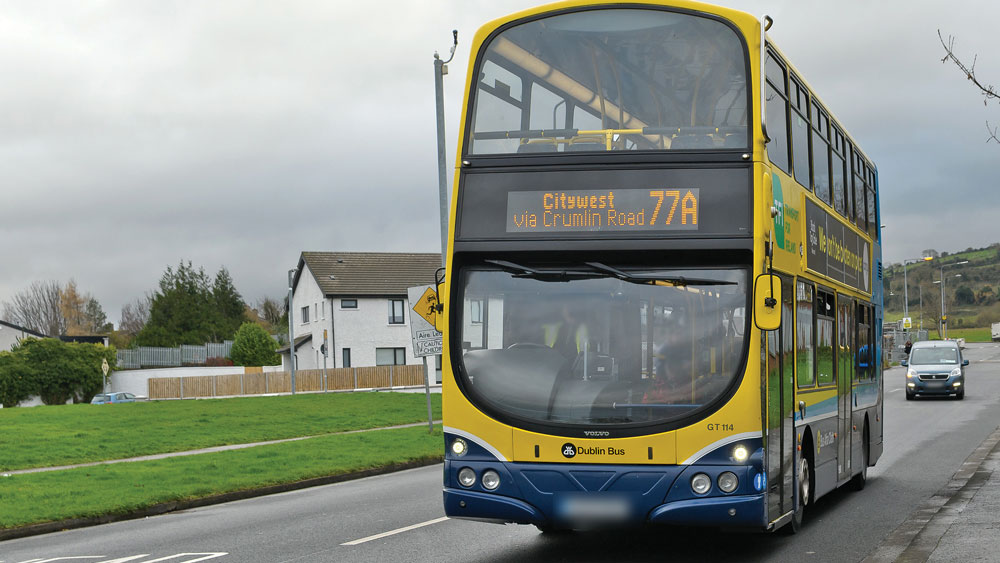 Bus services may be suspended in run-up to Christmas time

DUBLIN Bus services to West Tallaght could be suspended in the run-up to Christmas and the New Year due to worsening issues with anti-social behaviour, according to a transport union official.

Sean Yeates from the National Bus and Rail Union (NBRU) has been a bus driver for the past 24 years, and told The Echo that the current issues facing drivers in West Tallaght are the worst he’s ever seen.

The affected bus routes are primarily the 77A, 27 and 65B, with Mr Yeates saying that the instances of anti-social behaviour on buses in the area are occurring on a daily basis.

“It just seems to have gone haywire in West Tallaght,” he said. “But I’m reluctant to pull buses from the area.

“We always want to protect the drivers, but we’re also mindful that people who are going to hospital appointments or the shops, who aren’t involved in the anti-social behaviour, will be affected.

“Since October there’s been 50 incidents reported in West Tallaght. Lately there’s been one incident every day there.”

Mr Yeates said recent incidents include a 77A bus driver who had a full takeaway cup of coke with ice thrown at the side of his head when two youths forced their way onto the bus at traffic lights.

When the bus driver told them to leave the bus, they threw the cup at him. That driver has yet to return to work since the incident.

In another incident, according to Mr Yeates, a bus driver on the 27 was in Jobstown when a passenger decided, out of the blue, to pull out a penknife and tried to smash the driver’s side screen.

A commuter who contacted The Echo this week also relayed how they attempted to get onto a 65B bus in Citywest on Sunday afternoon, but the driver told them they couldn’t get on as a bus window had been smashed.

When an incident of anti-social behaviour occurs, the agreement the drivers have is that services will be suspended in that area for an hour following the incident.

If a second incident occurs in the area that day, then services to that area are suspended for the rest of the night in what is colloquially known amongst drivers as the ‘West Tallaght Agreement’.

At present, Mr Yeates said drivers are considering suspending services to West Tallaght entirely in the evenings, and terminating at The Square, pending the outcome of an emergency meeting this Friday.

“There has to be a change in the way the ‘West Tallaght Agreement’ operates,” added Mr Yeates.

“If the anti-social behaviour continues to spiral, I can see a very unhappy New Year for bus passengers in West Tallaght. There’s a risk of a major curtailment if it continues.”

Mr Yeates said that while bus drivers have a good rapport with Tallaght gardaí, they are aware that the guards are under-resourced, and they feel unsupported by local politicians and representatives.

He is appealing to parents in West Tallaght to be mindful of where their children are, and to make them aware of the impact anti-social behaviour has on the community.

“What we’re saying to the local community is you have a responsibility to keep bus services in your area,” said Mr Yeates.

A decision on whether the suspension of services to West Tallaght will be implemented will be made following an emergency meeting between Dublin Bus and union officials this Friday.

A spokesperson for Dublin Bus told The Echo that the company takes incidents of anti-social behaviour “extremely seriously”, and each bus is fitted with CCTV and radio communications, which means drivers can immediately contact the Central Control Centre who can then contact gardaí.

“All Dublin Bus employees are fully trained on the comprehensive procedures for dealing with specific challenging situations including anti-social behaviour,” said the spokesperson.

“We also have mobile inspectors in the city centre, who are available to attend incidents as required.

“Dublin Bus has a strong and close working relationship with An Garda Síochána and has set up a number of community forums in different areas across the city.

“The company is also a member of the National Transport Authority’s Anti-Social Behaviour working group.

“In addition to this, we also operate a Schools Education Programme which involves educating young people about the importance of the bus in their lives and in their local community.

“The work of our school and community co-ordinators has also proven highly successful in encouraging young people to respect their bus and has assisted greatly in the reduction of incidents of anti-social behaviour.”