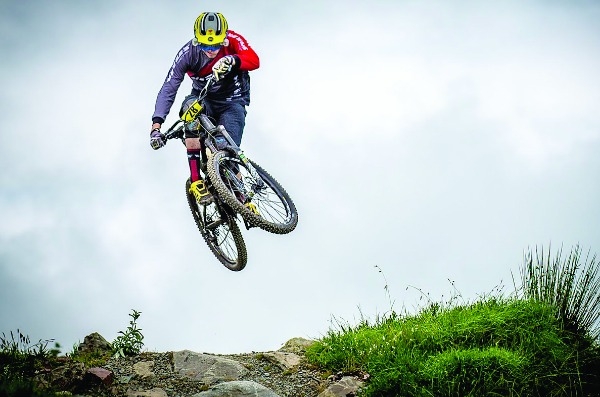 The event, which was organised by the Biking.ie crew, saw more than 250 of the country’s top riders tackle five challenging stages- a task made even more difficult by the constantly changing weather.

Runner-up in the opening round in Three Rock, Kelan Grant set the early pace followed by Dan Wolfe with fellow Dubliner Gavin O Connell taking third and Callaghan, who is in his first year contesting the Pro Men Category, in fifth place overall.

A long descent of over five minutes through the forested stages of Stage Three saw Wolfe the only competitor to record a time under the five-minute mark putting him six seconds clear of his rivals.

The mist had now turned to rain which made the stages even more difficult to negotiate and Stage Four was to give Wolfe a increased cushion with a time two seconds the better of his rivals.

Yet Callaghan was now starting to claw back some time into Wolfe’s lead, finishing just two seconds shy with Nathan McComb third and local man Jonathan Maunsell in fourth.

It was the treacherous 500 plus meters climb to the top of Seefin Mountain where Callaghan would have to draw on his expertise to regain lost time and get himself back into a podium position.

The final Stage Five had been unseen by the riders on Sunday which now had overnight rain and 200 plus riders negotiating the slippery ruts that leads to exposed tree roots.

Yet the conditions suited Callaghan who pulled back a massive nine seconds on Wolfe’s commanding lead.

In the end Wolfe managed to hold on for the victory, just four seconds ahead of Callaghan with Nathan McComb taking the final podium position.

“I was a bit slow to get going cause the first stages don’t suit my riding style but once I got into the technical parts of the course I knew I’d a lot of time to pull back on Dan and Nathan” Callaghan told The Echo.

“I’m really happy. A year ago I couldn’t keep up with Dan and tried to learn from him, so to be this close gives me good confidence before I head off to France next week” he added.

Meanwhile Callaghan’s 15-year-old brother Emmet has been making great progress in the Under 18 division.

The Junior Cert student recorded some consistent placings over the testing stages, returning third, fourth, fifth, third and fourth positions during Sunday’s event to see him emerge third from his class.