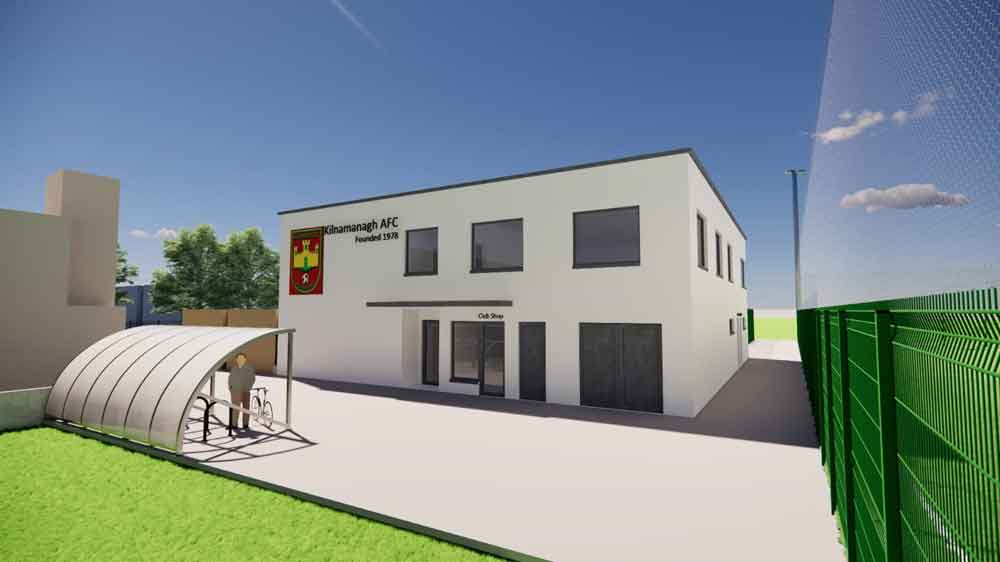 An artist impression of the Kilnamanagh Football Club development

KILNAMANAGH AFC is ‘bitterly disappointed’ that a leave to appeal has been granted against their plans for a new clubhouse on Treepark Road.

As reported in The Echo last week, the Kilnamanagh Family Recreation Centre had submitted a leave to appeal to An Bord Pleanála (ABP) about the car parking aspect of the new clubhouse plans.

ABP granted permission for the leave to appeal on January 12, meaning the recreation centre has two weeks from the date of that decision to submit an appeal.

The recreation centre’s leave to appeal specifically concerned the car parking aspect of the permitted development, as a portion of the proposed car park for the clubhouse falls into the grounds of the community centre.

This has been a disappointing blow to the football club, who have raised a total of €56,000 through various fundraising initiatives over the last 12 months to fund the development of the clubhouse.

In a statement posted online on Saturday, the club said, in part: “Like any major infrastructure project, we have unexpected issues arise, but the recent car parking objection has been bitterly disappointing.”

The club claimed they had been “100 per cent transparent” with the recreation centre about the clubhouse plans from the outset, adding that the centre had previously offered to extend their bar area so the football club could have dressing rooms underneath, but the club declined this offer.

According to the club, they were recently denied a grant which they believed was the result of “the uncertainty with the complaint over the carpark”, adding that while this may not have been the sole reason for the grant being refused it was “a negative influencing factor”.

The club said they will “fully engage” with ABP when the opportunity arises, and they will continue to liaise with the recreation centre, local community groups and politicians about the clubhouse plans.

The point of contention rests on a portion of the planned carpark for clubhouse development that, according to the recreation centre, falls into their grounds.

Last December the then-chairman of the recreation centre, Martin O’Brien, said the leave to appeal centred only on “a single aspect of the development i.e. the 67 car parking spaces the applicant was subsequently requested to provide”.

The 67 car parking spaces were not in the football club’s initial application for planning permission, but were added to the application at a later stage via additional information that was requested by the council.

The car parking spaces “are not within the land of the proposed development but are located in our community centre grounds,” according to Mr O’Brien.

If the recreation centre does submit an appeal to ABP, the board will typically aim to reach a decision within 14 weeks which means if the appeal is lodged, a decision will be expected in April this year.