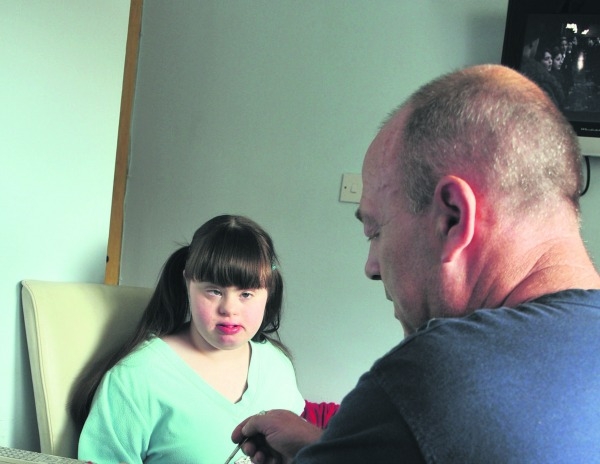 A TALLAGHT father who is the sole carer for his daughter has spoken of the need for vulnerable and neglected families to be recognised by the state.

Danielle goes to St John of God’s day centre in Tallaght five days a week but outside of that, Des cares for her at home.

Speaking to The Echo ahead of the launch of the 10th Carers of the Year Awards, Des said: “I realised how on our own that me and Danielle were when I had a heart attack in January.

“Danielle was being cared for by family while I was in hospital, but after four days I had to sign myself out because the people looking after Danielle just couldn’t cope – and I couldn’t afford to pay for a carer.

“I’ve begged for additional support but sadly all of the services out there are really under-resourced, including the Carers – which does amazing work and gives great moral support.

“However, due to cutbacks, the Carers is feeling the pressure too.”

Des, who was a recipient of a Carer’s award in the past, feels that politicians have, over the years, “disregarded” vulnerable people, including older people, the sick and those with disabilities.

“Carers and their families have simply been ignored, neglected and disregarded”, Des said.

“Families who care for a loved one in the home are under a lot of stress and huge financial burden.

“I can’t drive my car at the moment because I can’t afford the insurance and now have to travel with Danielle to day care everyday by bus.

“My time is so limited with everything I do for Danielle and not having a car just adds to the pressure and frustration.

“I wouldn’t change a thing about caring for Danielle but the support given to families does need to change and services like the Carers need to be properly funded.”

This Thursday (May 26), Family Carers Ireland, which represents 200,000 family carers, is launching its 10th Carers of the Year Awards 2016 – which celebrates the enormous contribution and loving care provided by family carers like Des.

Catherine Cox of Family Carers Ireland, which is the newly merged organisation of The Carers Association, said: “Launching our tenth Carers of the Year Awards is a very special milestone.

“Family carers provide high levels of care in the home to their loved ones, including older people, those terminally ill and with disabilities.

“This care is provided with love and we want to celebrate family carers and young carers across Ireland with these awards.

“So many people give their time and often sacrifice many aspects of their lives to provide care to loved ones, often over many years.”

Members of the public are being encouraged to nominate a carer for a Carers of the Year Awards by the closing date of Friday, September 16.

TAGS Carer of the Year awardsSt John of GodsTallaghtTymonville
Share This