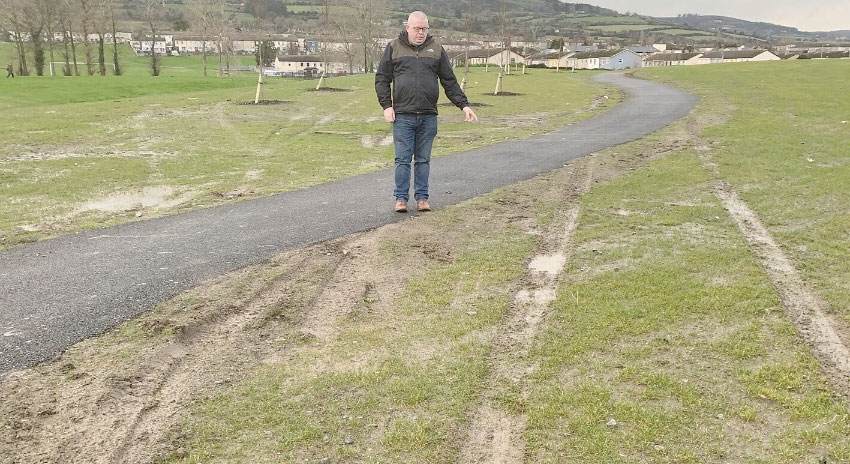 Cars and scramblers are destroying pitches

A NEW infill housing development is providing an access point for cars and scramblers to get into Killinarden Park, according to a local councillor.

Issues with cars gaining access to the park have been ongoing for several years, with South Dublin County Council erecting a boundary wall in order to deter access to the park, however the development of new infill housing has created a new access point to the park – which has inadvertently allowed access for scrambler bikes and cars.

Cllr Dermot Richardson at the track marks in Killinarden Park

As previously reported in The Echo last April, playing pitches in the park, which are used by Croí Ró Naofa GAA Club, were damaged by tyre tracks going through the park and damaging the grass.

Sinn Féin councillor Dermot Richardson told The Echo that the GAA club recently had to cancel matches because of the condition of the playing pitches.

Cllr Richardson added: “There is an entrance through the infill estate that’s getting them into the park.

“This is destroying the playing pitches in the park – the cars are getting in there on a nightly basis, and the cars are being left burnt out.

“They know they can get into the park and rally around.”

Cllr Richardson is calling on the council to secure the boundary wall at the entrance to the park that is beside the infill housing development.

A spokesperson for South Dublin County Council was contacted for comment, but they did not respond in time for print.