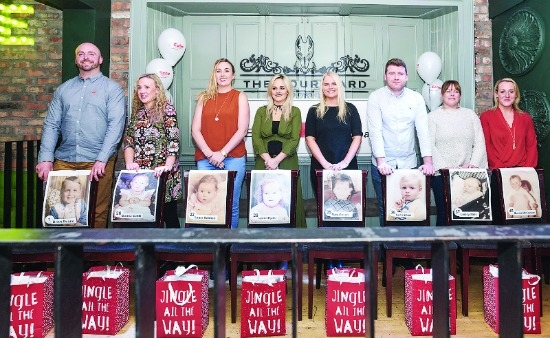 Celebrating in style as the lovely Bonny Baby of 1983

LYNDA RYDER has been crowned The Echo’s Bonny Baby of 1983 at a reception in Molloy’s of Tallaght last Thursday night. Lynda made it into the final 10 after she was nominated by her parents Sandra and Tony.

Lynda, who grew up in Aylesbury, lives in Old Bawn with her husband Ger and her children Olivia (4) and Finn (2).

Lynda had a feeling that she would be nominated when she read in The Echo that they were looking for 1983 babies.

She said: “My sister made to the final for the 1980 baby a few years ago. I get The Echo every week and when I saw they were looking for 1983 babies, I had a feeling my mother would put my name forward”.

Lynda was surprised when she made it to the final.

She said: “ I was absolutely shocked when I made it to the final 10 and I was looking forward to the evening. I never win anything. Really, I never do. It was unreal, It really was. It was a great night. The Echo and Molloys really put on a great evening. We had a lot of fun.”

She was presented with her prize, a cheque for €1,000 by Emma Kennedy, Managing Director of The Echo.

Lynda says she wants to give the money to her parents.

She said: “They are having absolutely none of it. I know if I give it to them they will send it right back. I might get a voucher for them for a weekend away or for something. We moved into our house a year ago, so I could use it to get a few things for the house.”