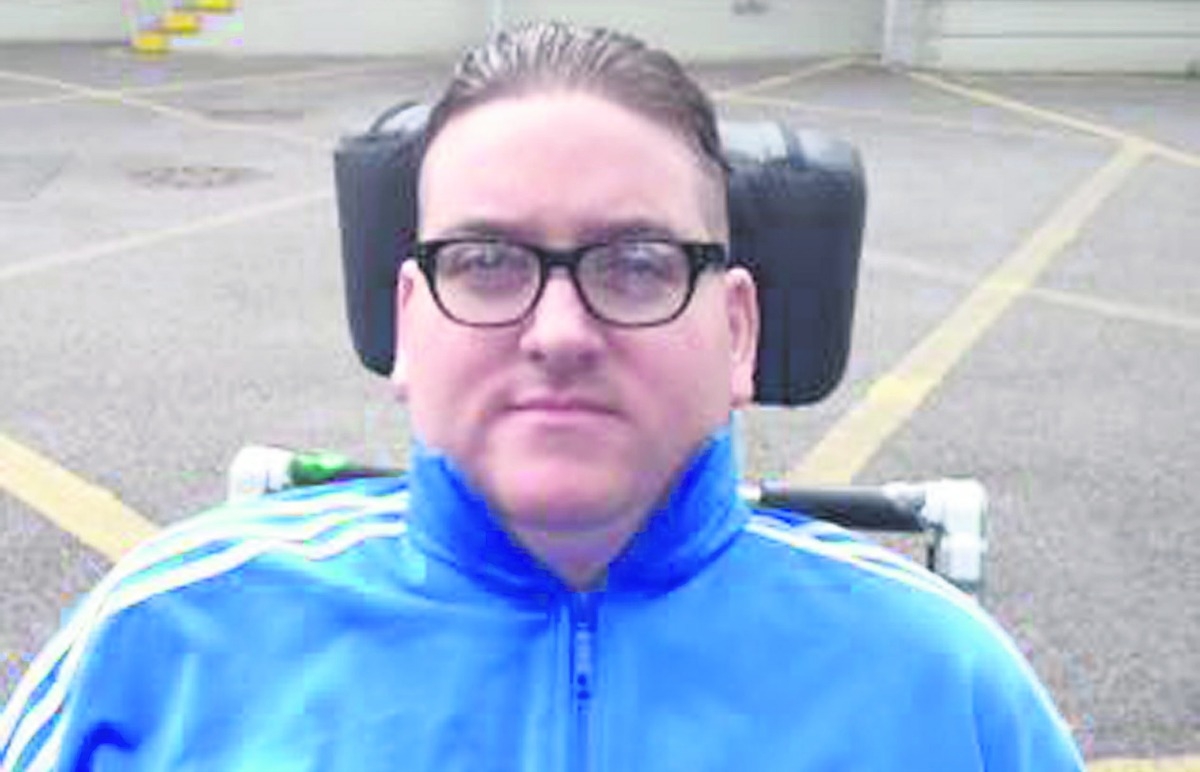 ADAM Taylor started getting sudden pains in his back a few years ago, but as a young man he attributed the niggles to the labour involved in his physical job.

After a couple of years suffering from pain and headaches, the Clondalkin man eventually went to A&E, where doctors would discover a massive cancerous tumour which went from his brain to his spine.

In July, Adam underwent surgery at Tallaght Hospital, which while successful, has left his body in almost complete paralysis.

He developed a number of complications and setbacks, nearly dying on three occasions, and in November ended up back in intensive care with double pneumonia and in a coma for 11 days.

The tumour and its removal caused nerve damage which means Adam requires 24/7 care.

Heartbreak has already befallen Adam’s Neilstown family, after the tragic loss of two of his brothers Jeffrey in 2001 and Richard in 2015.

Despite the setbacks, Adam recently learned to communicate with his friends on Facebook through the use of a special stick that he holds in his mouth and types on his phone, which is mounted to a table.

Currently undergoing rehab in Dun Laoghaire, doctors discovered tremors which are hindering his progress and he is due to be assessed for a baclofen pump to counter the tremors.

Adam (33) hasn’t left hospital since July last year, but his friends have rallied to try and bring him home, raising over €12,000 in just four days.

Childhood friends Joseph Kelly, Martin Land and Brian O’Toole kickstarted a benefit page for Adam on Saturday, and have been “overwhelmed” by the response in the community.

“The response has been crazy,” said Joseph.

“It think it reflects how people have been shocked to see what he is going through. Adam has worked with Tipperary Water since he was 15, never missed a day. The tremors have regressed progress and he has developed a heart condition.

“We set up an iFund page and are having a fundraiser in the Green Isle on June 24. The hotel gave us the room for free, 40 businesses are sponsoring on the night, and local businessman Joe Doyle raised €5,000 and donated €2,000 personally.”

Funds are needed to install modifications in the family home, and a wheelchair to provide Adam some independence.

“He has been literally torn apart with all the surgery and setbacks,” said Joseph, who along with Adam is a “long-suffering Aston Villa fan.”

“The target is to raise €15,000-€20,000 and have him home by Christmas. The family have put in planning permission to make modifications downstairs. When that goes in, they can then apply for a grant.

“At the moment he is in Dun Laoghaire doing rehab but will go back to Tallaght in June. Unlike other people in the ward, Adam can’t go home at the weekends. It’s very sad, he is just lying there in bed.

“We want to thank everyone for their support, and raise awareness of Adam’s condition.”

The benefit night for Adam takes place in the Green Isle Hotel on June 24.

People can donate at www.ifundraise.ie/3159_adam-s-room.html.