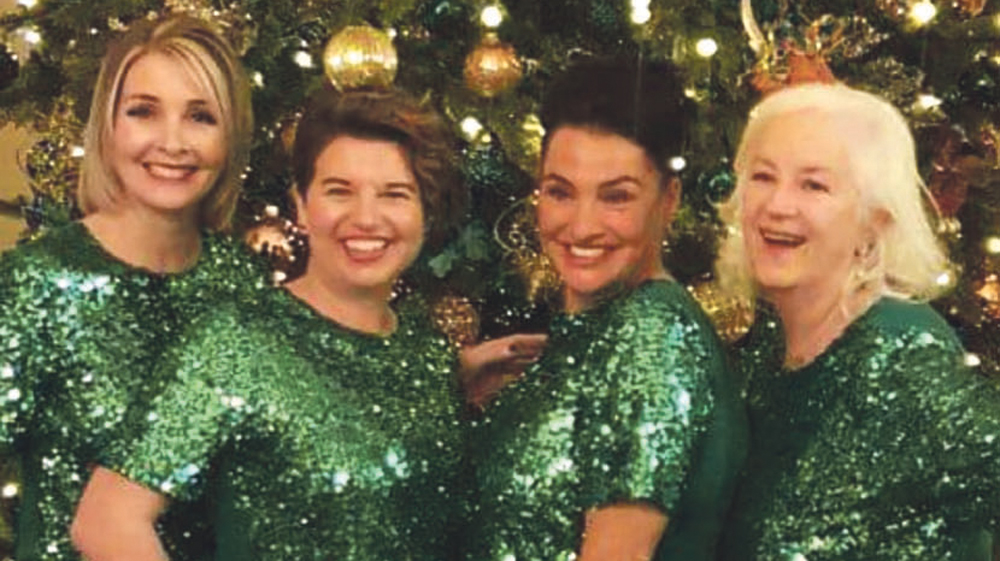 THE Sea of Change Choir, which is made up of women who are cancer survivors and supporters, sang at the closing of the World Health Organisation’s International Event for Cervical Cancer Elimination last week and also switched on the Christmas lights at the Shelbourne Hotel in the city centre.

The choir previously helped to turn on the Christmas lights in the Shelbourne in 2019, and were invited back again this year along with RTÉ’s Ryan Tubridy for the festive celebration.

Four members of the choir, Barbara Kelly and Linda Flood from Balrothery in Tallaght and Angela Hogan and Audrey Brown from Old Bawn, sang Christmas carols for the guests of the Shelbourne at the event.

“It was great,” Barbara told The Echo. “It was absolutely brilliant. Ryan Tubridy was so nice and the Shelbourne is such a monumental place in Dublin.

“We did about a half an hour of Christmas carols just to get everybody in the humour. Then when the lights went on, the Shelbourne turned all the lights teal for cervical cancer awareness.”

Earlier that day on Thursday, November 17, a prerecording of the choir performing Paddy Casey’s ‘Times Are Tough (But So Are We)’ was broadcast at the end of the WHO’s cervical cancer elimination conference.

“It was such an honour to be asked to do it,” added Barbara. “It went out to over 150 countries worldwide.”

The choir was proud to be a part of the event and also to get the opportunity to highlight the importance of the HPV vaccine, according to Barbara.

For more information on the choir, visit Sea of Change Choir page on Facebook.