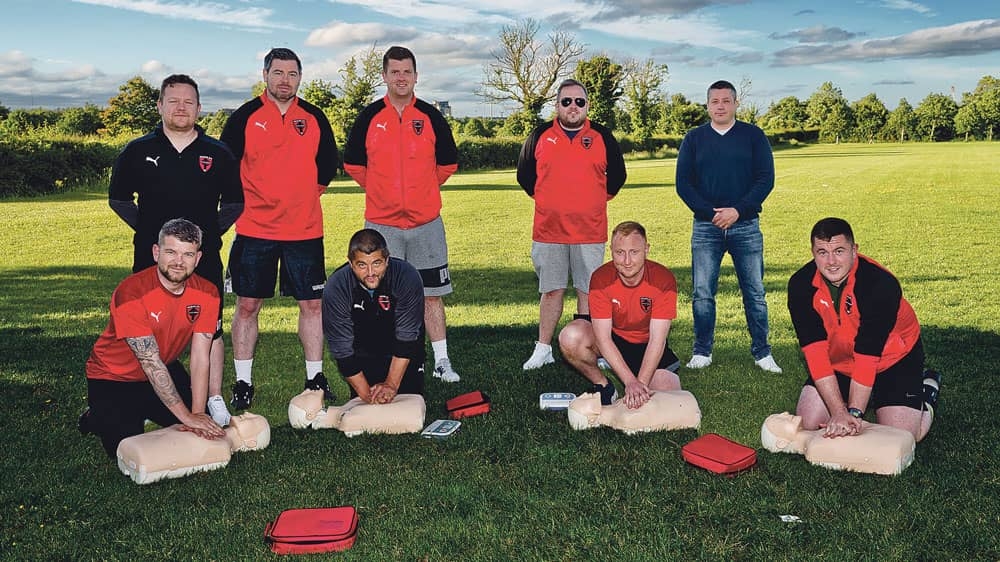 EVERY minute that passes, survival rates of cardiac arrest are reduced by 10 percent and this has prompted Belgard Athletic FC to successfully fundraise over €3,000 for the purchase of a defibrillator.

Last weekend, as Denmark started their European Championship campaign against Finland, the world took notice of the importance of defibrillation after player Christian Eriksen collapsed during the game.

The club doing a First Aid Course on Tuesay evening

Denmark team doctor Morten Boesen confirmed later that Eriksen had suffered cardiac arrest on the pitch and millions of television viewers watched on as he underwent treatment on the pitch.

“I think when we saw what happened to Christian Eriksen, it made us realise that we really need to get defibrillators for our teams,” Belgard Athletic team manager Graham Costigan told The Echo.

“We have a WhatsApp with all of the players in it and as it was happening, lads were just horrified by what they were seeing.

“Over the years it’s one of those things that we’d always say, ‘right we need to get a defibrillator’.

“But then we wouldn’t have the money, something would come and the can would get kicked down the road.

“You never think it’s going to be you until it is and this is something that can effect people young and old.”

According to AED Ireland, in having a defibrillator on site within two-minutes, there can be an 80 percent chance of survival in a cardiological incident.

In the aftermath of the incident, Belgard Athletic launched a fundraiser for the purchase of two defibrillators for their two teams with a target of €3,000.

“Within 24 hours, we hit the target – we just struck when the time was right,” Graham continued.

“We have 70 lads and I just sent in a lengthy message, saying for the price of a few points, just €20 from each player would make up half the target.

“Then it’d just be family members and friends to get the other half of the funds and thankfully we got there.”

The club purchased two defibrillators, one for each team, from Heart Safety Solutions on the Airton Road on Wednesday morning.

The night before, eight members from the club attended a First Aid course to ensure they are fully up to scratch on all emergency procedures.