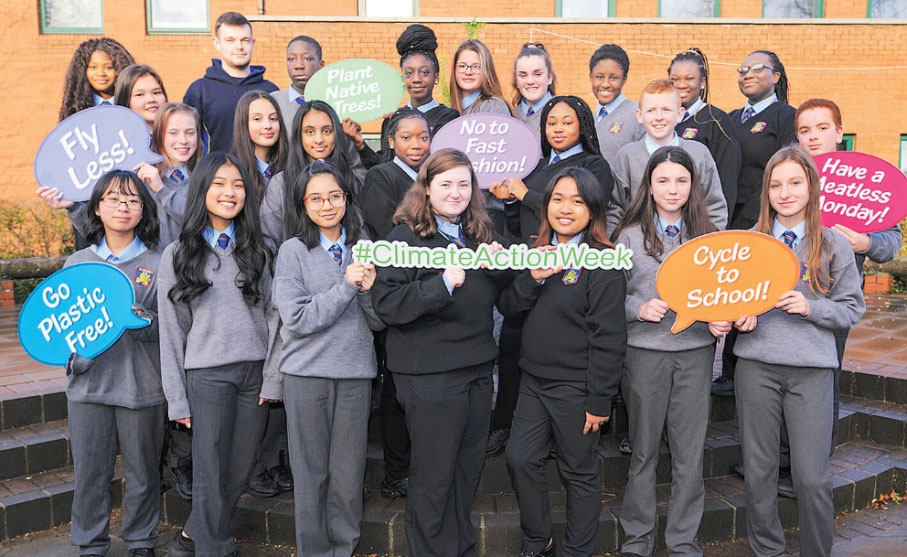 Students and staff from St Mark’s Community School in Tallaght took it into their own hands to show their support for Climate Action Week by having meatless lunches, plant-based food demos, and making autumn wreaths from fallen leaves and recycled card.

They hoped by this example that they would make people more aware of climate change and the necessity of changing their lifestyles.

Climate Action Week was organised from the Environmental Education Unit of An Taisce and is Ireland’s only week dedicated to taking action on climate change in schools, homes and communities.

In an effort to create awareness about the high carbon footprint of meat, St Mark’s students and teachers who stayed in for lunch were asked if they would consider a meatless lunch on Monday, October 15.

Aldi at Belgard Square provided them with an array of tasty plant-based treats. Tallaght-based company and Vegan cheese distributers Art of Zen Foods sponsored some amazing vegan cheeses which went down well with students and teachers alike.

There was a large selection of falafel wraps with hummus and roasted peppers, barm brack, vegan cheese and crackers with dips available for all and not a piece of food was left.

Having the support from Aldi and Art of Zen made the event more than possible and it was good to have that connection with local business.

Following on from Meatless Monday a lunch-time plant-based food demo for the students showed them how to make the falafel wraps from Aldi.

This also crossed over with the healthy-eating schools team as healthy eating is something St Mark’s is trying to improve on.

These wreaths are currently displayed in the front area of the school and drew a lot of positive attention to Climate Action Week.

Geography and Science groups ran various projects and poster design classes. A Transition Year group did an art project based on sustainable art, they also used autumn leaves but this time they made their own paper.

Overall the activities and lessons that happened in St Mark’s provided a huge amount of information on climate change. It was their first year to take part as this year they have also applied for their first Green Flag for litter and waste.

After a year of unprecedented storms, floods, droughts and heatwaves it is hoped that the youth of Ireland who took part in this action are listened to.

Young people like those in St Mark’s Community School are calling for climate action now.