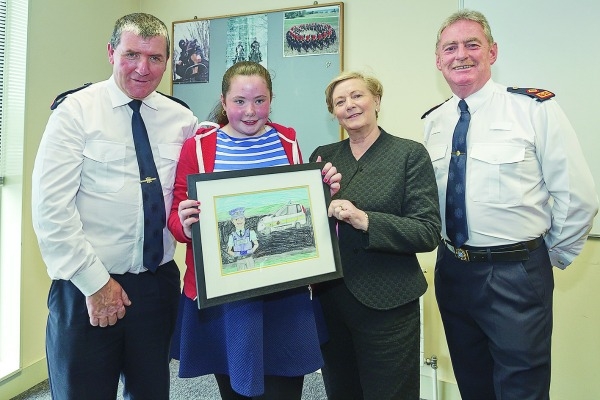 CLONDALKIN Garda Station hosted an open day on Saturday, which saw the community enjoy interactions with staff and emergency services personnel, along with guided tours of the station, which recently underwent a revamp in the custody suite.

The sun may not have been shining, but it didn’t dampen the mood at the seventh annual Clondalkin Garda Station open day.

“The aim of the day is to foster better relations between the community and Clondalkin Garda Station,” said Clondalkin Community Garda Stephen Lydon.

“There was a large attendance, visitors got tours of the station, saw the public office, CCTV cameras, phone dispatches, the newly refurbished custody suite.

“The highlight of the day is the presentation of the art exhibition. We run a garda schools programme for fifth class pupils of primary schools in Clondalkin. The theme is garda in the community.

“We pick a winner from each school, and Tánaiste Frances Fitzgerald presented an overall winner’s prize to Ciara Courtney from Scoil Mhuire.”

The station’s custody suite was recently refurbished with new doors and a flooring system.

After enjoying a tour of the station, visitors went out to the courtyard, where they got to experience the workings of a range of garda units, from mounted to underwater, and from dog to mobile command and control units.

Emergency services were also involved, with displays by the Civil Defence, the Bomb Disposal Team from Cathal Brugha Barracks, and Road Safety Authority.

Dublin Fire Brigade performed a rescue demonstration for the crowd – cutting open the doors, roof and windows of a car.