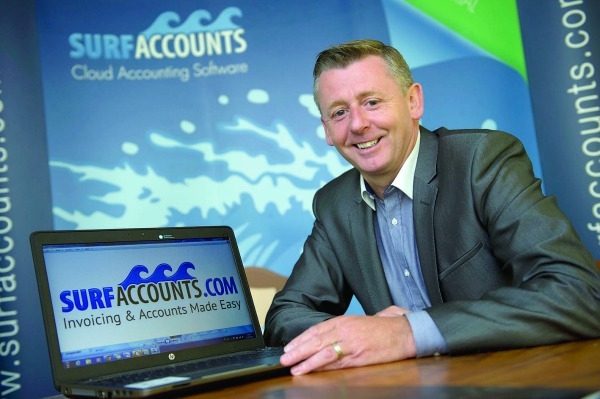 TALLAGHT firm Surf Accounts has enjoyed a 60 per cent increase in new customers using their cloud-based accounts packages over the last 12 months.

Founded by Ray Rogers and Richie McMahon in 2011, Surf Accounts is one of the only cloud-based accountancy package available in Ireland.

Their platform allows accountants and business owners to view and edit accounts anytime, anywhere and on any device.

Located in Whitestown Way, the company provide packages suited to small business owners, cutting down on the amount of hours spent sending invoices and payments to customers.

With over 2,000 customers, including accountancy firms and theirclients, Surf Accounts have doubled their staff – from six in 2014 to 13 in 2016.

The company plan to recruit a further 10 digital marketing, technical, support and training staff in the next 12 months for their headquarters in Southcity Business Park, Tallaght.

In May of this year, Surf Accounts was awarded the Grand Prix, or the overall winner prize, at the Bank of Ireland Startup Awards, beating great competition from over 600 start-ups.

Monthly invoicing and accounts packages start at €14.95, which include free telephone and email support with training available online or in the company’s Tallaght facility.

“Accountancy has been slow to catch up with the rest of the workplace, and we’re passionate about innovating the market, both in Ireland and abroad.

“At Surf Accounts we try to give users a platform to run their businesses rather than just a basic bookkeeping package.”