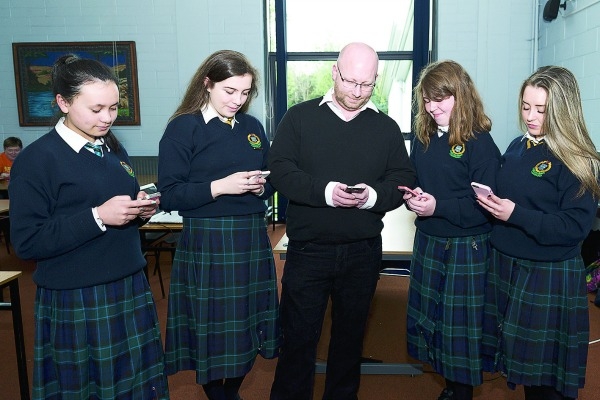 THE challenges facing children in a highly connected digital world – particularly obsession/dependence with mobile phones - were discussed during an informative talk at Coláiste Bríde, Clondalkin, on Wednesday.

Parents were invited to the free seminar, which was delivered by child/adolescent psychoanalytical psychotherapist Colman Noctor, and award winning film producer Lord David Puttnam – who is chair of Atticus Education and Ireland’s Digital Champion.

The talk forms part of Coláiste Bríde’s ongoing programme of partnership with parents in the wider community, and was filmed for an RTE documentary to be shown later this year.

Noctor, a self-confessed technology addict, has a keen interest in the effects of contemporary media on child development and mental health.

He is the author of Cop On – a book which focuses on the ability to be rational, resilient and sensible.

In the talk on Wednesday, Noctor discussed issues, including what age parents should give children a smartphone, what age kids should join Facebook or SnapChat, and how much time they should spend online per day.

Puttnam delivers seminars on a variety of subjects to educational institutions around the world.

He believes technology becomes valuable when the people using it are “well trained, well equipped, confident and imaginative.”

Parents concerned about their children’s relationship with social media, can sign up for technology evenings at Coláiste Bríde, where teachers will help them become familiar with social media outlets teenagers are using.

The workshops can help parents and children develop a healthy relationship with the technology they use everyday.