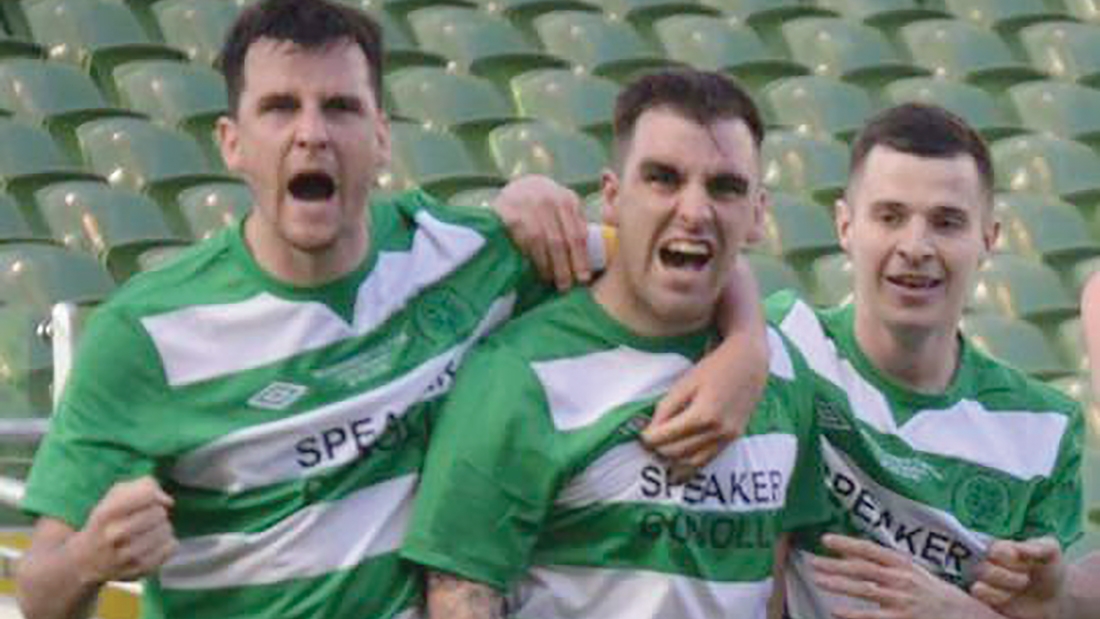 Collinstown and SHFC hoping LSL can finish out 2019/20 season

SACRED Heart Firhouse Clover and Collinstown FC are among the clubs hoping the Leinster Senior League will manage to complete the 2019/20 season.

Currently leading the way in the LSL Senior One and Senior 1A divisions respectively, the two clubs have applauded the League’s ‘wait and see’ approach to the COVID-19 crises before deciding on whether to complete or scrap the current season.

Darren Forsyth, Carl Forsyth and Mikey Doyle have helped Sacred Heart Firhouse Clover to the peak of the Senior One table and will be hoping to get the chance to secure the title

And the signs do appear promising after all clubs under the jurisdiction of the FAI were permitted make a safe return to training in line with the FAI’s Protocol and Government guidelines from last Monday.

Initial proposals indicate that the LSL is aiming to get its season back up and running by August 28 and completed by October 6 before their bid to start the new season ten days later on October 16.

While it is a very tight time frame for a number of clubs, some of whom have up to half a season remaining, there remains hope that a return to competitive action could be made even sooner, but all that is dependent on the continued progress the country is making from the COVID-19 crises.

“I think the league has handled it well” said Sacred Heart Firhouse Clover manager Peter Flood. “Their attitude is we’ll go back to football on the provision that it is safe to do so.

“I’ve talked to some clubs whose leagues have scrapped the season and they’re telling me that they can’t organise training, they have little or no communication with their players and they don’t know what players are coming back.

“We’ve had constant communication with our players. The players have been training on their own while following guidelines and we have something that we can work towards.

“Ultimately we’d love to finish the season on the football pitch, but we’re not going to put any players at risk and there’s no pressure on anybody to come back now. Some might have people at home who are at a higher risk” he pointed out.

Collinstown boss Kevin Carroll is of a similar mind telling The Echo “We want to finish the season because we’re obviously in a position to get promoted.

“In fairness to the Leinster Senior League, they have held back and waited to see how things would go while some other leagues just scrapped their season.

“Things are working well now, so it looks like they have made the right decision, so far at least.

“We have only seven games left so we’re in a good position. We could finish our season in three weeks with midweek games, but there are other clubs who have more matches to play” he pointed out.

Collinstown are on course for their fourth promotion in as many seasons having topped the Major One and Major divisions before finishing runner-up in Senior 1B last season.

The team had also reached the last eight of the Charlie Cahill Cup and the semi finals of the Metro, but it is the league that they are most concerned about completing.

Crumlin United senior team manager Martin Loughran, meanwhile, is also delighted to see club players back in training this week and is hoping more clarity can be provided in relation to the resumption of the league.

With his side only halfway through their Senior Division campaign, he believes that the initial proposal for completing the 2019/20 season may have to be looked at again.

“They’re looking at finishing the old season between August 28 and October 6 and then start the new season on October 16, just a ten-day turnaround to get ready for a new campaign” he told The Echo.

“To be honest, it would great to be able to finish the season out, but you’re trying to get what you’d normally manage in 12 weeks done in six weeks.

“We were only halfway through our season. We had 13 games left. They might have to look at  pushing it [the end of the season] out further” he suggested.