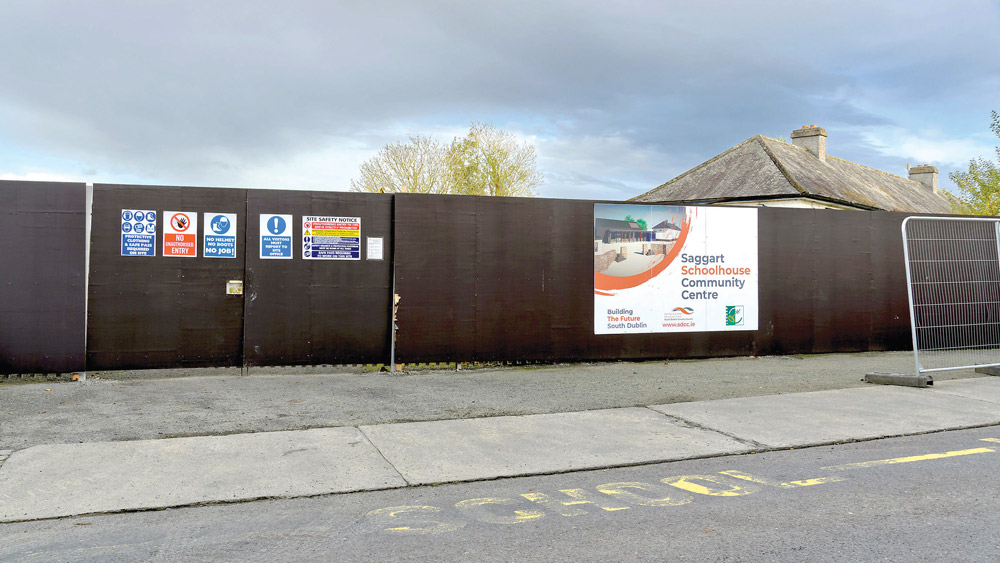 The site of the Saggart Schoolhouse Community Centre

GROUND has been broken on the new Saggart Schoolhouse Community Centre renovation project – it is now due to be completed by summer 2023.

At the recent committee meeting for the Saggart area, Cllr Shirley O’Hara asked for a report on the new community centre and for a timeframe for completion of the project.

In response, the council said that “construction has begun on the Saggart Schoolhouse Community Centre project with a current projected completion date of Summer 2023”.

“SDCC Community is supporting the BOM [Board of Management] of Saggart Schoolhouse Community Centre throughout this process,” the local authority said.

The renovation project to transform the former St Mary’s National School in Saggart to a community and civic centre was given the thumbs-up by South Dublin County Council in June 2020.

A protected structure, the school building has been unoccupied since 2014 and will be conserved, restored and renovated ahead of the construction of a new single-storey hall at the site.

Following the purchasing of the lands by the council, according to a report by the county Cheif Executive Daniel McLoughlin, the site was identified as an opportunity to save an “important part of the heritage of Saggart” and “link it” with the growing community.

A Board of Management was established in 2020 incorporating local residents, community groups and the council, with the contract awarded to a developer in March 2021.

As reported in The Echo in July 2021, construction works were due to commence imminently as final legal agreements were drawn up.

At that time, the Board indicated an intention to open its doors in Spring 2022. However, it was not until June of this year, when then Mayor Peter Kavanagh turned the sod to officially launch the project and construction works have now finally begun.

Previously speaking to The Echo about the project, Cllr Francis Timmons described the project as “invaluable”.

“Saggart is one of the fastest-growing areas in South Dublin County with the level of investment in housing, but you can’t put thousands of houses in and not provide adequate facilities,” Cllr Timmons said.

“This community centre will be invaluable for the area.

“You need facilities to go along with housing because it allows you to create the necessary space for a community to grow and continue to develop, places for them to go and meet, and a community centre is a great place for that.”

NEWER POSTOver €1,200 raised at event for Irish Guide Dogs for the Blind
OLDER POSTLocal History with Monica McGill – Clondalkin cobbler was a poet, an author and a social activist