THE Kilnamanagh Family Recreation Centre’s application for leave to appeal South Dublin County Council’s decision to grant permission to Kilnamanagh AFC for a new clubhouse on Treepark Road has been granted permission by An Bord Pleanála (ABP).

The recreation centre now has two weeks from the date of ABP’s decision – January 12 – to lodge an appeal against the council’s grant of permission for the Kilnamanagh AFC clubhouse.

As previously reported in The Echo, the recreation centre’s management wanted to specifically appeal the car parking aspect of the permitted development, as a portion of the proposed car park for the clubhouse falls into the grounds of the community centre.

An Bord Pleanála received the community centre’s application for leave to appeal last month, after it was lodged by the chairman of the Kilnamanagh Family Recreation Centre, Martin O’Brien.

Mr O’Brien stated that the leave to appeal centred only on “a single aspect of the development i.e. the 67 car parking spaces the applicant was subsequently requested to provide”.

The 67 car parking spaces were not in the football club’s initial application for planning permission, but were added to the application at a later stage via additional information that was requested by the council. 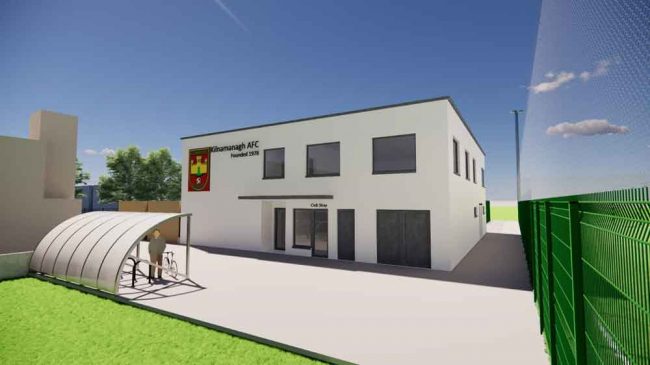 An artist impression of the Kilnamanagh Football Club plans

The car parking spaces “are not within the land of the proposed development but are located in our community centre grounds,” according to Mr O’Brien.

However, Mr O’Brien added that the community centre is “extremely open” to working with the football club to come up with “a viable alternative” for the location of the car parking spaces.

On January 12, ABP granted leave to appeal to the Kilnamanagh Family Recreation Centre.