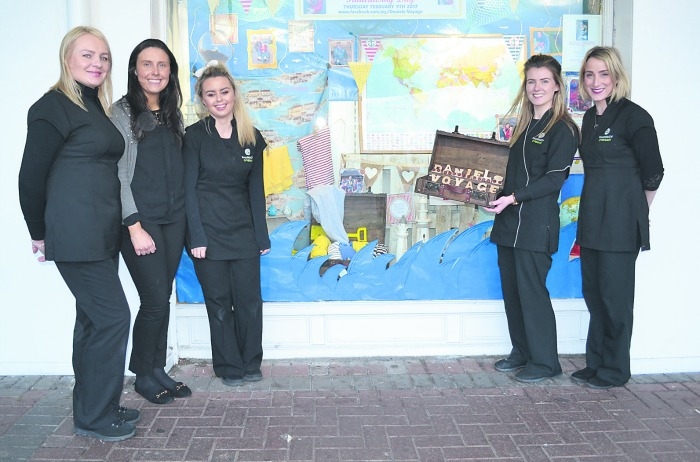 THE community is being invited to support a fundraising drive in Pharmacy O’ Regan, Old Bawn, for a nine-year-old boy who has one of the most severe cases of a rare genetic disorder recorded in Ireland.

Living off the Kiltipper Road in Riverview estate, Daniel Tighe is one of around 40 children living in Ireland with a rare genetic disorder called Sotos Syndrome – a disorder that causes a number of issues, including rapid growth during the early years of life.

Last month, his parents Sinead and Keith sought the public’s support in adapting the down stairs of their Tallaght home, to give their son a “safer and better quality of life”.

Ciara O’Malley, store manager, told The Echo: “Staff saw the article in The Echo and they came to me in the hope of doing something to support Daniel and his family.

“Daniel has been a customer of ours since he was a baby, he’s a lovely boy, and we would know his mam and dad quite well from coming into the pharmacy.

“We don’t usually do fundraising events like this but the staff really wanted to support Daniel.”

On Thursday, February 9, Pharmacy O’ Regan will hold a bumper fundraising day from 9am until 9pm, with an open invite extended to the entire community to attend.

Mini make-overs will be on offer for €10, eye lash application tutorials for €5, which includes a set of eye lashes, free blood pressure testing, a bake sale, raffles and more, with all money raised on the day going directly to Daniel.

For further information on Daniel and his campaign, or how you can donate or fundraise, visit the Daniel’s Voyage Facebook page.