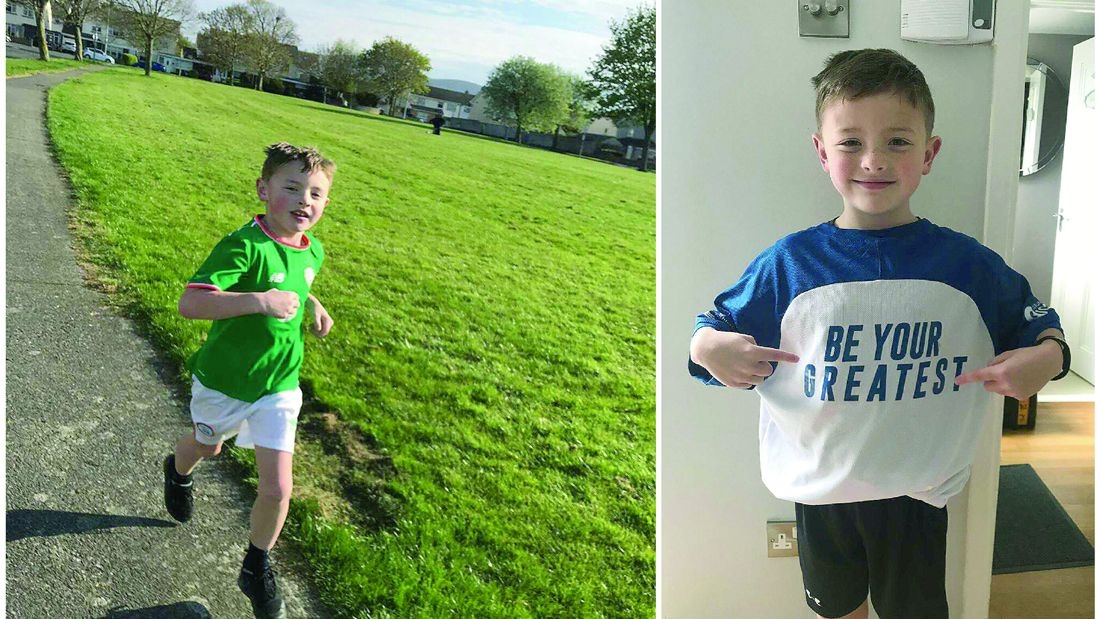 AN EIGHT-year-old Tallaght boy has over the space of a week ran 42.2km in aid of charity Alone, a marathon effort from the young lad, which has raised over €3,000.

A pupil of Scoil Maelruain and a member of Tallaght Town FC, Conor McGarry told his dad Keith a couple of weeks back that he would like to do something to help during this time.

Conor McGarry ran 42.5km in the space of a week

When dad Keith asked his young son what he would like to raise money for, Conor said for a charity that helps older people, and Alone was chosen.

And that was it, Keith and Conor were off on an eight-day, 42.2km challenge, that saw them run six 5km and two 6km runs within a 2km zone of their Old Bawn home.

“He came to me and said, ‘dad I want to do something, I want to run a marathon’.

“I do a bit of running so had a route mapped around the Old Bawn and Aylesbury area.

“We did the last few kilometres in the field in our estate, and the neighbours and some of his school pals came out and, social distancing, clapped him on.

“There was unbelievable support.”

The 42.2km marathon challenge was spread out over eight days, Saturday, April 18, to Saturday, April 25 – with €3,140 raised at the time of The Echo going to print on Wednesday.

“We’d like to say thanks so much to people, we’re so, so appreciative of the support”, Keith said.

“This money will make a big difference especially to older people at this time.”

Keith told The Echo how the whole family, including Conor’s mam Claire, his little brother and sister Grace and Ollie and his grandparents are all so proud of him.

Conor’s JustGiving page (Conors challenge) is still active for those who would like to support Conor’s massive effort to help older people who may be feeling lonely at this time.

Donate to Conor on his JustGiving page HERE.

For further details on Alone and the work the charity does in supporting older people, visit the Alone website.