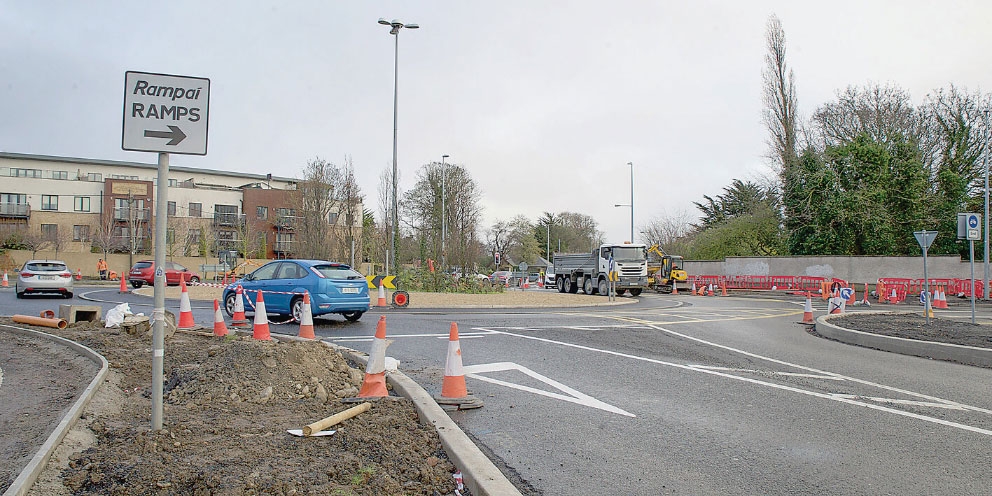 THE COUNCIL is expected to pay €1.2m for their work on the Orlagh roundabout in Knocklyon, works which residents say have led to lengthy traffic tailbacks in the area, and there are plans for a protest at the roundabout.

As previously reported in The Echo, construction work began on the installation of a shared cycle and pedestrian way leading to the roundabout in July, where traffic was then reduced to a single lane on approach to the roundabout, which it is believed is now leading to traffic tailbacks.

Fianna Fáil councillor for Rathfarnham, Deirdre O’Donovan, set up a petition in December that at the time of print had amassed over 4,800 signatures, calling on South Dublin County Council to reinstate the previous layout of the roundabout.

Over 250 protestors then converged on Orlagh roundabout in January, to voice their frustrations about the traffic tailbacks that have plagued the area since the works began, and a smaller protest was then held outside South Dublin County Council’s offices last month.

Another protest has been organised at the roundabout for Saturday, March 9 at 3pm, following the news that the works, which had an initial tender value of €860k, now have an expected outrun cost of approximately €1.2m.

Cllr O’Donovan told The Echo: “It’s absolutely outrageous, and what’s even more shocking is the fact that the works went through public consultation, were brought before councillors, but it was agreed and based on a few minutes of drone footage – then the decision was made to take a lane away.

“The whole thing has been an unmitigated disaster. This fight is far from over.”

When previously contacted by The Echo, a spokesperson for South Dublin County Council stated: “Roads Design and Construction acknowledge that there have been delays at the roundabout, which has caused public disquiet.

“We feel the reason for the delays are that there have been very poor weather conditions recently, which slows traffic considerably, and an additional amount of delay is caused by drivers slowing down to view the roadworks.”

The spokesperson added that the council had carried out a drone survey earlier this year and found that “the two lanes on the Scholarstown Road Eastern Arm were rarely used and when they were, they caused conflicts.”

The construction of the shared cycle and footpath is being designed to “provide an alternative to the private car”, according to the spokesperson, and when the work is completed by the end of this week they will “monitor the works to determine if they are working satisfactorily.”

The topic will also be discussed at a council meeting on March 12.