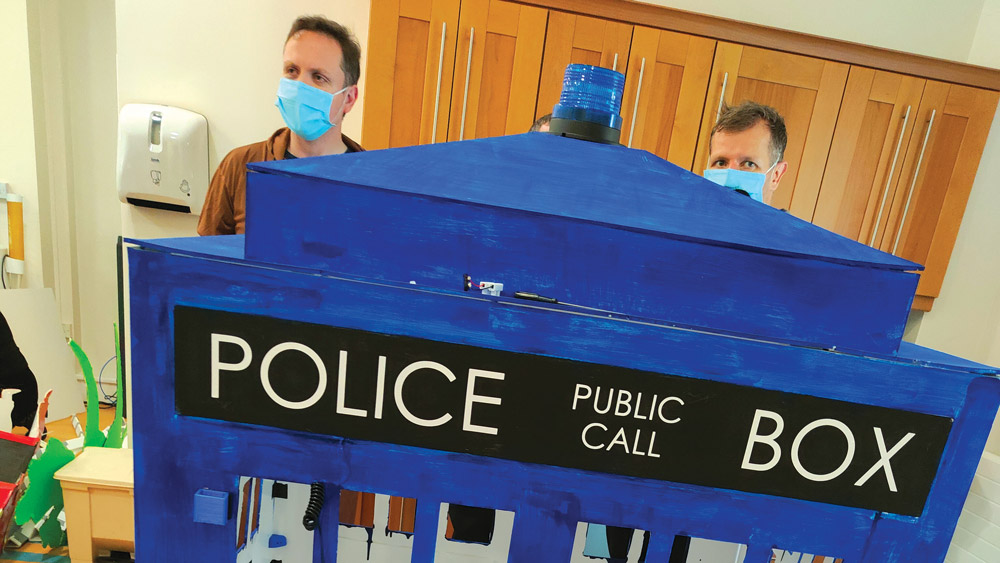 Costumes made by students bring so much joy to families

CHILDREN from the LauraLynn Children’s Hospice donned Halloween costumes that were custom-made by TUDublin Tallaght students at a parade in the charity’s Foxrock campus last week.

The costumes were made by the students in collaboration with student-run charity 3DAssist which creates printed devices for children and adults who are missing wrists, elbows, arms or hands.

The Halloween costumes are being specially-made for the children, who are missing limbs – the students incorporated the children’s prosthetics into the costumes.

The children, who attend the LauraLynn Children’s Hospice as they have life-limiting conditions, all gave the students an idea of the costumes they wanted to wear – from Super Mario to dinosaurs.

Last Thursday, October 27, the children got to wear their costumes in a Halloween parade in LauraLynn, where they also met ‘Late Late Toy Show’ host Ryan Tubridy.

Sarah Jane Keddy, a marketing student at TUDublin Tallaght who is assisting with PR for the project, told The Echo: “It went really well, the parents and all of the families were really excited.

“The 3DAssist team were really great, and it felt like they got to know the families when they were making the costumes.

“For the students, I think it was nice for them to do something that wasn’t in a work setting, but that was for charity, and for the families, it helped them to make connections with more people.”

The work of the students was praised by senior play therapist at LauraLynn, Michelle Hartnett, who emphasised the positive effect the project had on the children in the hospice.

“Halloween is an exciting time for children and as Ireland’s only children’s hospice, we always aim to make it inclusive and special for the children and families in our care,” said Ms Hartnett.

“This year we kick started the spooky season with our very first Halloween Parade around the campus and gardens of LauraLynn.

“The School of Engineering students from Technological University Dublin were once again on hand this year to create wheelchair accessible costumes for some of the children who avail of LauraLynn’s care.

“This collaborative process with TUD has led to some tremendously creative finished looks.

“No matter a child’s level of mobility, LauraLynn’s aim is that children and families are inspired and feel included by these amazing and creative wheelchair costumes.

“Those that require use of a wheelchair are sometimes challenged at Halloween by costumes that are not accessible to their needs, with many families creating costumes from scratch.

“We are honoured to have the support of the talented students in TUD and I would like to thank them for this wonderful collaboration and everything they make possible.

“All of us in LauraLynn are really excited to see how this concept develops.”