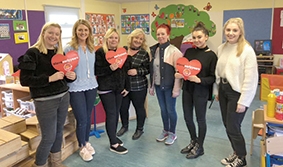 SIPTU members, working as childcare professionals, in Ballyfermot are calling on all Dublin City Councillors to support their campaign for fair pay and recognition.

"We urge all Councillors to support this motion and add their voice in support of our campaign for recognition and respect for all childcare professionals.”

"However, many workers are paid less than the living wage and have little recognition for their qualifications or for the responsibility involved in their profession.”

Big Start activist, Bernie Quinn said: “The average hourly rate for a childcare assistant is just €10.27 per hour, whereas the average living wage in Ireland is at least €11.45 per hour.

“Some childcare professionals pay almost €5,000 for their qualifications, and they can be paid as little as €5,700 per year.

“The Government must recognise the importance of a properly funded Early Years sector which is affordable for parents and provides a sustainable living for childcare professionals.”