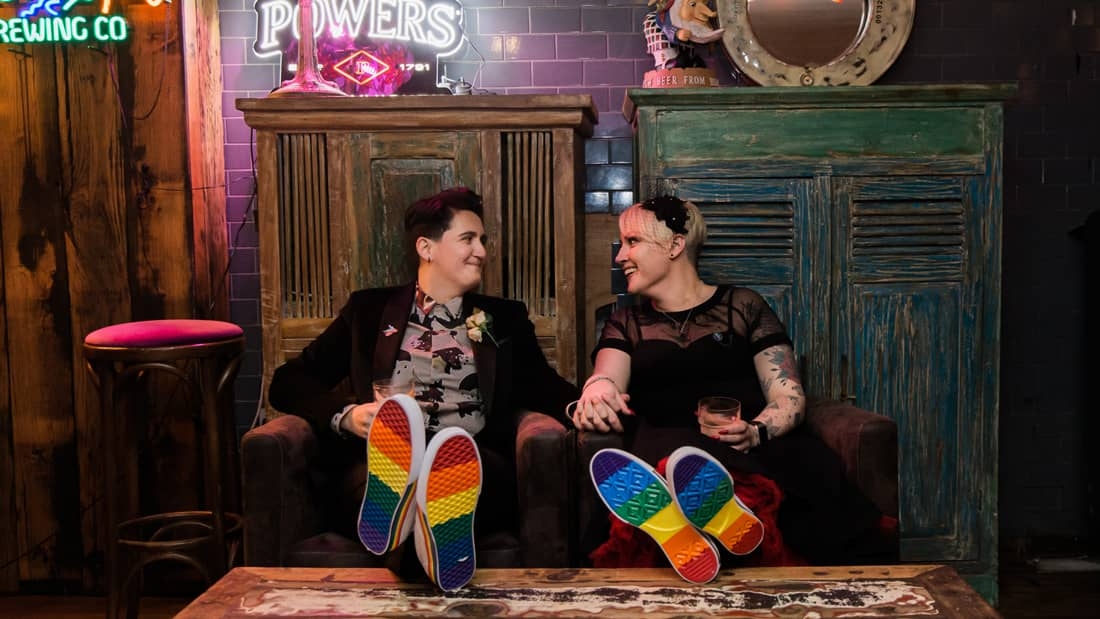 Couples ‘My Little Big Day’ during the global pandemic

A LOCAL couple appeared on a documentary about people tying the knot during the global pandemic, reports Caomhóg Breathneach.

Dani Wrafter, 35 and Jo Murphy, 33, appeared on the television documentary ‘My Little Big Day’ which aired on RTÉ1 on Monday March 15.

Dani and Jo got married during the pandemic

Dani has lived in Tallaght for the last 9 years and works in LinkedIn and Jo is from Bray, Co Wicklow and lives in Tallaght with Dani and her two daughters from a previous marriage.

The documentary told the story of six couple’s wedding planning journeys in the midst of the Covid-19 pandemic.

Speaking about how their appearance in the documentary came about, Jo told The Echo: “Dani and I are part of this private group on Facebook which is a social community and support group for LGBTQ+ and I think a producer from RTE added it to the group and we saw it and submitted our little three-minute video application to it.”

Dani and Jo met on Bumble and after a few dates say they just knew they were right for each other.

Dani and Jo got married during the pandemic

“I wasn’t single very long, I was in a relationship and when that ended, I thought I would go on a couple of dates, just take some time for myself and that did not happen,” Dani explained in the documentary.

Jo says that she was pretty much single her whole life, as she did not come into her sexuality until her mid-late twenties.

“Last year when her relationship ended, she popped up on my Bumble and it was an instant match. We set up a date for the following weekend and I arrived and there was a pint of Guinness there waiting for me, which is perfect.

“Within two weeks of meeting, we just knew. We decided that yeah, we’re going to get married,” said Jo.

Viewers saw Dani and Jo decide to get married in a civil ceremony in Dublin’s City Hall in November 2020 with 18 guests, when the restrictions at the time allowed a maximum of 25. They also had photographer, Felix Williams, who is based in Rua Red in Tallaght, to take pictures of their big day.

“Covid was a factor for sure, we initially planned to have about 140, 150 people. That was the amount of save the dates we had sent out to people.

“I think that kind of intimate ceremony was more us than we had realised beforehand, so we were definitely happy with the amount of guests that we had,” said Jo.

In the documentary, Dani and Jo explained that as a same-sex couple, having the recognition of being legally married and having equal rights as heterosexual couples is very important for them.

It was also revealed in the documentary that Dani suffers from Lupus.

“Dani has some chronic health issues, and she could end up in hospital at any time and we want to have those legal protections behind us.

“I want to be able to walk into a hospital or up to a doctor and say that’s my wife. To be able to do that is really important and we don’t want to have to wait,” Jo explained.

Reflecting on the civil ceremony, Jo said: “I would have loved to have stood up in front of 150 guests and say, ‘this is my wife.’ That is the only thing that is kind of sad about it.”

Dani added: “The main thing that I’ve gotten from this pandemic is that yes, a big wedding would be amazing, but would it change our marriage? No. It completes us as a family.”