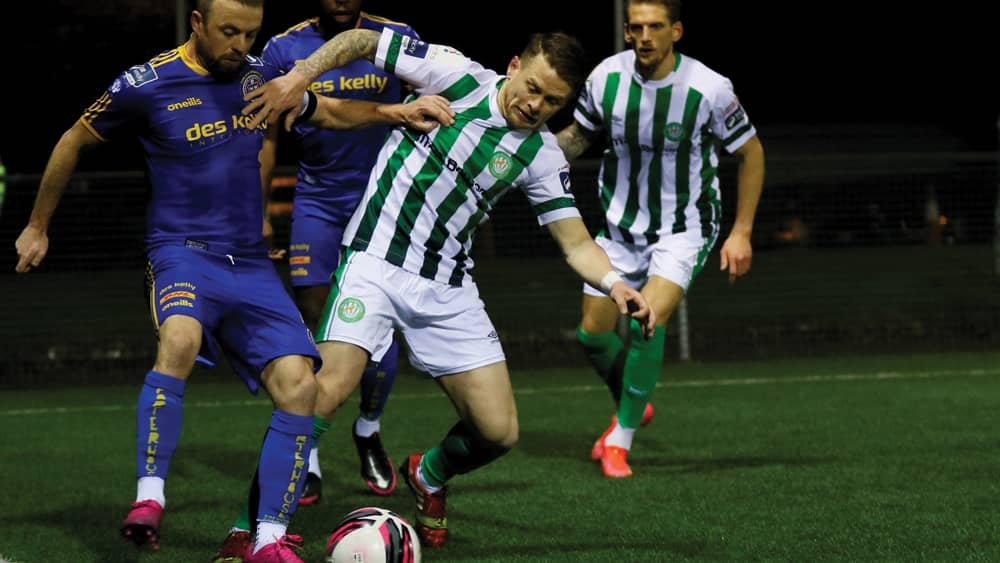 Byrne settles in Bray after tumultuous 2020

TALLAGHT’S Mark Byrne is relishing the opportunity to play in front of a crowd at the Carlisle Grounds, home of Bray Wanderers, when they can be welcomed back to the stadium.

Byrne, who spent his early years in Kilnamanagh before moving to Kingswood, recently signed a deal with the Seagulls for the 2021 League of Ireland First Division season.

He will be hoping to help Bray return to the top ranks after they narrowly missed out on promotion last year.

Bray will welcome the newly-formed Treaty United to the league on March 26.

“We’ve done well in pre-season, but when there’s three-points on the line, it’s different altogether” Byrne told The Echo.

“At the end of the day, we’re looking at promotion because Bray missed out by a point last year.

“People will look at Shelbourne or UCD and think they’re favourites, but we’d see ourselves up around there as well.

“It’s important that we keep to ourselves and keep chipping away.

“It’s a pity the fans can’t be there. It’s something I can’t wait to experience and I’m really looking forward to the start of the league now.”

Byrne spent time playing professional football in England, where he had spells at Nottingham Forest, Burton, Barnet, and Newport County before spending the guts of four-seasons with English League One side Gillingham.

After damaging his ACL, he underwent surgery in December 2019 and was ruled out of competition for the rest of the season.

Several different factors all came into play last year and as a result, Byrne made the decision move to Lucan – bringing an end to his 12-year stint in England.

“I was doing rehab on the ACL and everything kicked off with Covid then as well,” the 32-year-old explains.

“Gillingham offered me a comeback for pre-season training and if things went well, there would be an offer there for me.

“We were living in Kent and that was one of the worst affected areas with Covid and my little one was starting school then as well.

“We had moved around England so much and I just sat down with my wife and had a very honest conversation about settling back home in Ireland.

“It’s the best decision I’ve made to be honest.”

The former Kilnamanagh, Cherry Orchard and Crumlin schoolboy again weighed up his options after receiving a call from Bray boss Gary Cronin.

“The first training session then I just knew I was in the right place, I felt happy with Bray” said Byrne.

“I could stay at home and play football with Bray. What more could you want really?”