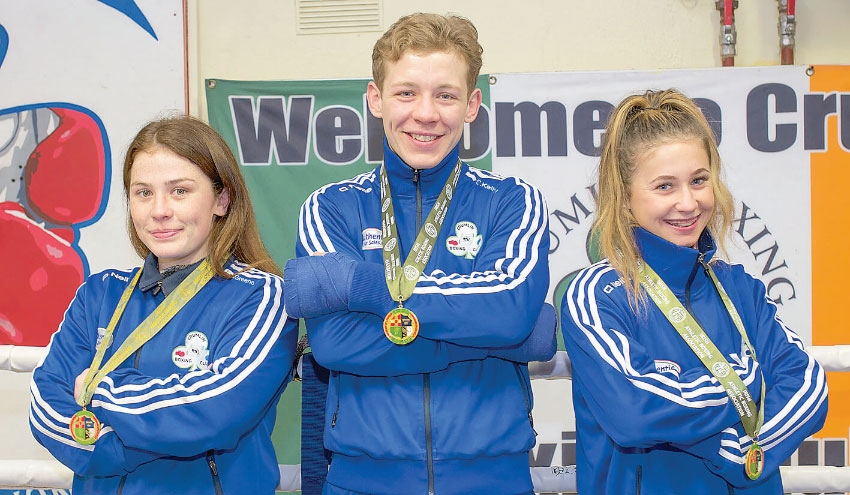 Crumlin BC make it a treble in Senior C’ship

CRUMLIN Boxing Club made it a treble in the National Senior Championships last week with Courtney Daly, Clodagh Greene and Senan Kelly winning titles in their respective divisions in the National Stadium.

The former completed her march to an eighth national title after she beat Emma Feeney on a unanimous decision to land the Women’s 48kg prize.

“Her opponent was very aggressive, but that just played into Courtney’s hands because we knew what she was going to bring and we were ready for it” he added.

It brought a successful conclusion to a fine campaign that also featured a 4-1 victory over Chloe Fleck in the semi finals.

Meanwhile her clubmate Clodagh Greene came through a tough battle with Caroline Gallagher to win the Women’s 69kg title on a 3-2 split decision.

And his club completed a treble when Kelly chalked up a 4-1 victory over Daniel Kyne of Celtic Eagles in the Men’s 64kg decider.

“Senan gave a good performance, but it wasn’t his best” admitted Sutcliffe.

“It was a close first round, but he began to really take over in the second and should really have stopped Kyne in the third.

“But he [Kyne] produced two good rallies and stayed in it. It was a good fight” he said.

Kelly had carded wins over Eamer Coughlan and Togher’s Alex Higgins en route to the championship final and, like Daly and Greene, will be turning his attention to the National Elite Championships early in the new year.