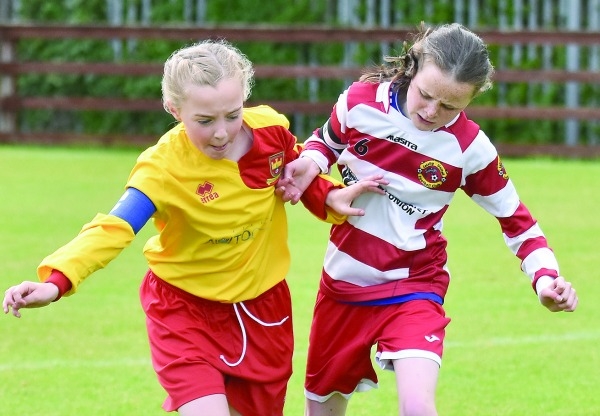 THERE was double delight for Kilnamanagh AFC in Sunday’s MGL Cup Finals at the Oscar Traynor Centre with their Under 11s landing the Irish Rail Cup while their Under 13s raised the Liam Farrell prize.

The former stormed to a 6-0 victory over a lively Leixlip United in their respective decider.

Niamh Cooper led the charge for the Tallaght side with four fine goals while Grace Connors made up the balance of their tally on the day.

Leixlip worked hard, but could not find a way past the uncompromising Kilnamanagh defence that has been marshalled so well this season by Roz McCashin and Niamh O’Connor while Leah Kelly has proven a real trojan in midfield.

It was a great achievement by this team that moved up from the Under 11A ranks into Premier midway through the season.

And given their form in this campaign, they are sure to prove a major force in the Under 12 Premier.

Following that win, the Kilnamanagh Under 13s carded an equally emphatic 7-1 triumph over Ratoath Harps to secure the Liam Farrell Cup with Tizana Gorniak accounting for no less than four goals.

Having wrapped up the Under 13A league title with a run of 12 wins from as many games, the Tallaght side set about adding the cup to their roll of honour, although they had to battle back from a goal down in the decider.

That said, once Gorniak got them back on level terms when she latched on to a sweet ball through by Tianna Tighe five minutes later, they never looked back from here.

Indeed another goal from Gorniak and two from Ella McCabe had them well in command by the halftime break.

The former bagged her second when she broke on to a nice through ball from Amy Jenkinson, while McCabe, younger sister of Arsenal and Republic of Ireland international Katie McCabe, took her goals superbly.

Kilnamanagh refused to let up in the second half, making it 5-1 when Cara Holland played a sweet ball over the top for Gorniak, who controlled it well before sliding it beyond the oncoming Ratoath goalkeeper.

In what was a superb team move involving some five passes, the Tallaght side added a sixth when, this time, Heather Kelly found Gorniak and she managed to squeeze her shot home from a tight enough angle.

And it was Heather Kelly who completed the scoring for the winners when she broke through from midfield, beating two players and seeing her initial shot parried before following up to tuck away the rebound.

While Gorniak and McCabe proved unstoppable up front, at the back, Rebecca McMahon was real warrior, picking up a bad knock to the hand that kept her out of the game for only a few minutes after which, it was discovered she had actually broken her wrist.

While the team will be moving up to Under 14 Premier next season, more than half the players are eligible still to play at Under 13 level again next season.

Certainly the side has made massive progress in the space of just a season as was demonstrated in the fact that they had lost 6-0 to Terenure in a cup final last year, but beat the same opposition 5-1 in the semi finals of this season’s competition.

“The girls have put in a huge effort and they’re getting their just rewards now” said a delighted Kilnamanagh manager Sean Kelly.

The teams are also on the lookout for a goalkeeper and anyone interested can phone the same contacts above.