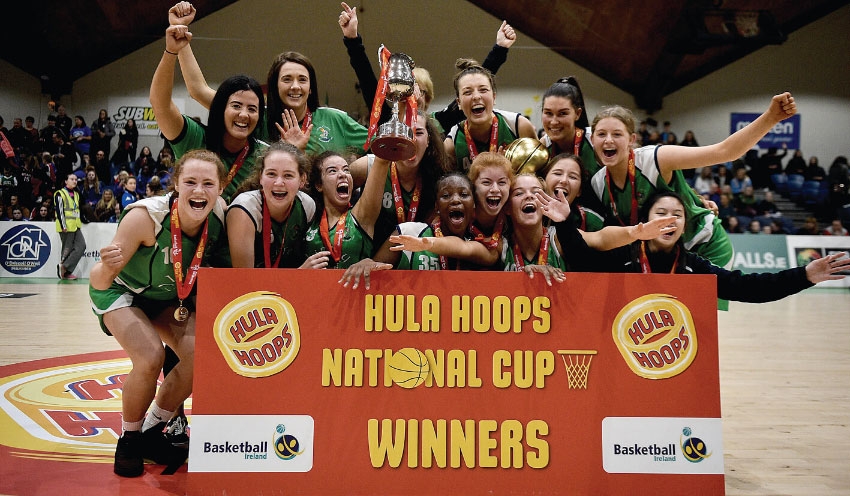 The former stormed to a 91-66 point triumph over Singleton SuperValu Brunell in their decider, blasting out of the blocks with five triples, and 19-year-old MVP Sorcha Tiernan accounting for three of them as she amassed 22 points.

Celtics built on their first quarter lead of six points to lead 43-23 at the halftime break, despite the best efforts of Madelyn Ganser, Amy Waters and Linda Rubene.

Yet, Brunell worked their way back into contention in the third, chalking up 23 points in that period with Simone O’Shea planting a big three-pointer and Tricia Byrne scoring eight points.

But they were unable to close the gap thanks in no small measure to the work of Karen Mealey together with Allie LeClaire and Briana Green who combined for 40 points.

That victory followed up on the club’s thrilling 66-64 point trimph over WIT Wildcats in the Under 18 Women’s showpiece.

The lead changed hands on numerous occasions but it was game MVP, Katie Williamson, finishing with 19 points and 18 rebounds, who made the decisive score for Celtics to bag her club’s first ever National Cup title.

Abby Flynn was the standout star once more for Wildcats, producing some super steals and scores at both end of the floor.

At the end of the first, Wildcats held the lead 15-11, but Celtics fought back in the second although it was Wildcats who had a two-point advantage at the halftime recess.

And with the aid of a superb performance by Abby Flynn, that narrow lead was doubled as the game headed into the fourth and final quarter.

Liffey hit back and just as the game appeared destined for overtime, a late Williamson lay-up effectively clinched it for them with 50 seconds remaining.

“It was an absolute battle from the beginning,” said Celtics’ coach Erin Bracken.

“I don’t think either team deserved to lose to be honest, but it was a great reflection for women’s basketball with the two best teams in the country playing each other.”