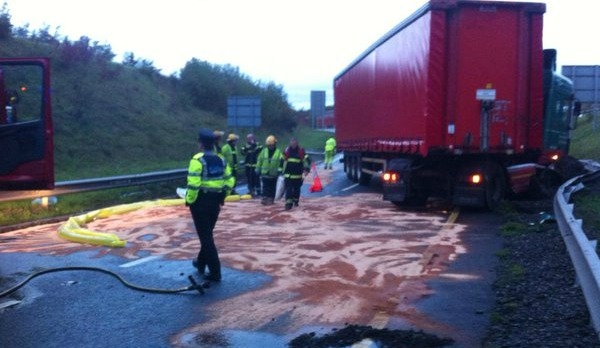 If you were stuck on the N7 or Red Cow this morning it was because a truck jack-knifed and crashed into a barrier, which lead to the fuel tank bursting.

Crews from Dublin Fire Brigade attended the scene around 7am this morning, and began trying to contain the fuel spill.

Using a boom, as can be seen in the pictures below that were shared by Dublin Fire Brigade on Twitter, the spill was brought under control, but long delays remained.

The potential rail strike, which was called off in the early hours of this morning, added to the traffic congestion in the area, and traffic remained heavy for three hours.

Gardai and members of the M50 motorway services crew were also in attendance, and the truck was removed from the scene at around 8am, with a road sweeper being deployed to clean the spill.