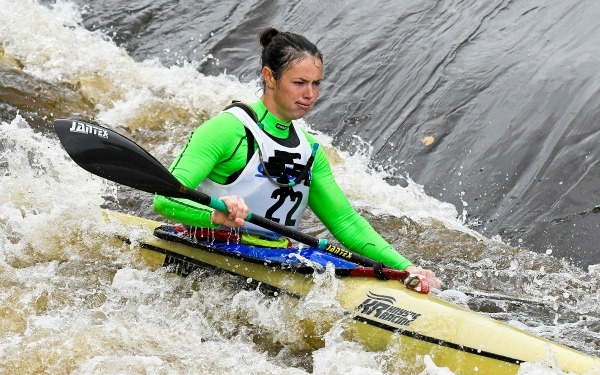 THE EGAN siblings Jenny and Peter from Lucan were among their stars at the 2016 International Liffey Descent on Saturday.

While the former took the Women’s K1 title in a record time of 2:04.14, Peter combined with Danish paddler Mads Brandt Pedersen to bag his third Men’s K2 prize.

Having scooped four Mixed K2 titles in succession, Jenny opted to contest the Women’s K1 division for the first time at this, the 57th edition of the competition.

A good clean run saw her take the title and break, by exactly three minutes, the 22-year-old record of 2:07.14 set by Michelle Barry.

“I got a relatively good start. I got to the first weir at Straffan which is about 1,500m after the start.

“With everyone so tight it’s crucial and I shot it well, but when I came down there was a pile of boats and I had a collision and had to reverse around.

“But after that I got going and made it through all the weirs with no swims and that was so important in getting the record,” she stressed.

Her brother and Pedersen, meanwhile, were really up against it in one of the strongest ever Men’s K2 fields seen in this competition.

“Looking at the line-up you just didn’t know who would fare well and who wouldn’t,” said Peter.

“There was a great international field with paddlers from the UK, South Africa, Germany, Belgium.

“We almost got caught up at the pile-up in Straffan, but we managed to correct that and got back on track.

“We were third over Straffan and the pile-up saw us drop to about eighth or tenth. But we managed to stay out of trouble and had a good clean race,” he added.

Indeed having taken the outright lead after Chapelizod, Egan and Pedersen, who was coming into this event off the back off his silver medal win in the World Under 23 K1 Marathon Championships in Germany, still had to fend off the serious challenge of English pairing Nicky Cresser and Jonathan Boyton in a thrilling sprint finish.

“Luckily we managed to hold on, but it was tough. When you have 29km in your arms you just want that finish line to come to you,” laughed Peter.

Bolstered by their success at the weekend, both Jenny and Peter will now be turning their attention to the ICF Classic Marathon World Series meet, the Adige in Italy this weekend.

The former, competing with a badly cut foot from the Liffey Descent, will be hoping to card her third win in the series and subsequently mount a challenge for the overall title.

Her tremendous World Cup Series form has continued, finishing fifth in the Marathon World Cup in Portugal and taking gold in the International Ribadesella Race in Spain ahead of her Liffey exploits.

It was these two most recent wins that have left her well in the reckoning for the World Series title overall.

“My aim for that [Ribadesella] was to hopefully try and win it, but I was up against a very strong field because there were others there who had hadn’t qualified [for the Olympic Games]” Jenny pointed out.

Now she will be hoping to follow up on that win while her brother will take his place in the Men’s K1 class there for the very first time.