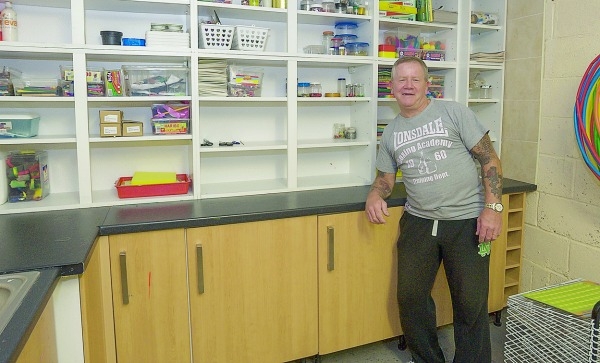 A RETIRED army veteran has appealed for volunteers to help revitalise a former community building.

The Our Lady of Victories building in Ballyfermot fell into disrepair after becoming vacant, but Tommy Fennell (60) has spent the last two years refurbishing the Sarsfield Road premises – cycling over from his home on Blackhorse Avenue every week.

Originally from Ballyfermot, Tommy runs the Black Dragon karate club at the OLV, and rents a room to a local Christian church.

He hopes to entice in more clubs and residents, once refurbishments to the toilets and the roof are completed in the coming weeks.

On Saturday, September 24, from 11am to 4pm, there will be a boot sale at the OLV building grounds.

Imelda Fennell, Tommy’s daughter, said: “We are having a rent-a-table day similar to a car boot sale, where you can rent a table for €15. I have a DJ and face painting for kids, it should be a good day out.

“Up to 14 tables are already snapped up. Tommy has come a long way from last year in getting the place sorted, but we need all the help we can get.”

The karate club used the OLV building for 37 years, before moving four years ago to the Ballyfermot leisure centre.

“The rent there went up, so we moved back, and I got the lease from two of the leaseholders,” said Tommy.

“The building was built years ago for the people of Ballyfermot. Canon Troy passed it on to the schools, but they eventually lost interest and it passed back to the OLV committee.”

He continued: “There were outstanding rates of up to €23k, but we paid it off in bits and pieces and Labour TD Michael Conaghan managed to secure a debt write-down. But we are still in need of an awful lot of help.

“I want to host film nights for pensioners, bingo nights, coffee mornings, breathe a bit of life back into it. The building has a lot of potential.”