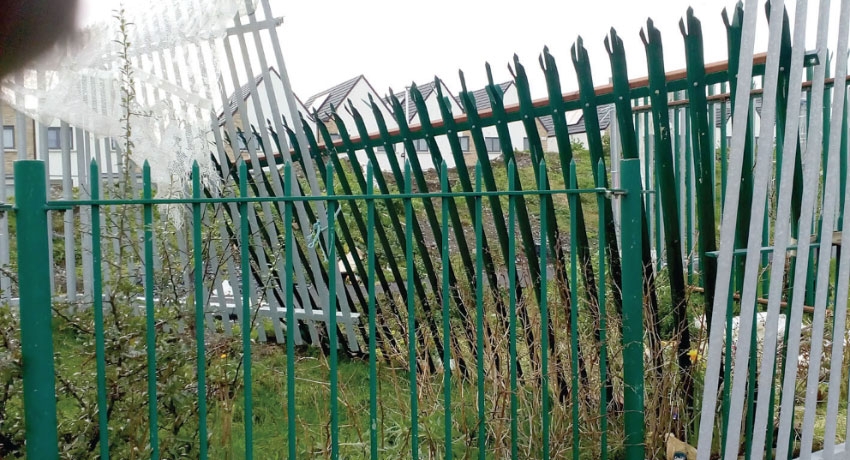 Fence at housing estate is in a ‘precarious and dangerous way’

FENCING at a housing estate in Cherry Orchard has been left in a “precarious and dangerous way”, according to a local resident.

Matthew Kelly from the Stone Soup Project, said the fencing has been damaged for “quite some time” and a section of it fell on a memorial tree he planted in memory of his late brother.

Mr Kelly said he has informed all authorities involved with the site but “nobody gives a damn.”

The social housing estate Orchard Meadows has been subject to delays. In September, builders pulled their tools off site amid fears they wouldn’t be paid following financial difficulties by site contractor MDY.

Up to 36 homes in the 72 Co-Operative Housing Ireland (CHI) development, were completed before Christmas and occupied by families on the housing list but the remaining 36 have yet to be let out.

Mr Kelly said he has contacted Dublin City Council, CHI and local councillors, to try and resolve the issue.

“Residents do not give a damn about the delay in the houses being finished,” he said.

“That is a matter between DCC, CHI and the families involved. Residents’ main worry is the dangerous and unsafe fencing that has been damaged for quite some time. What happens if some resident or child is injured.”

Last month, DCC said the draft contracts for the remaining 36 units were due to be signed, and it would take six weeks from signing them, until new tenants were able to move in.

Local councillors have criticised the delay, with a lack of street lighting leading to serious anti-social behavior.

At Wednesday’s area meeting, DCC area manager Kay Noonan said talks have been held with the project manager and it is their intention to carry out the removing and installation of fencing on site upon the first week of scheduled works.

She said the second week of works will focus on the removal of earth mounds.

“There is also the issue of street lighting, which has still not happened and there is no clarification from CHI.”

NEWER POST2,074 sign up for free book programme in first days of launch
OLDER POSTFormer Gallaher’s site on the market at €4.5m