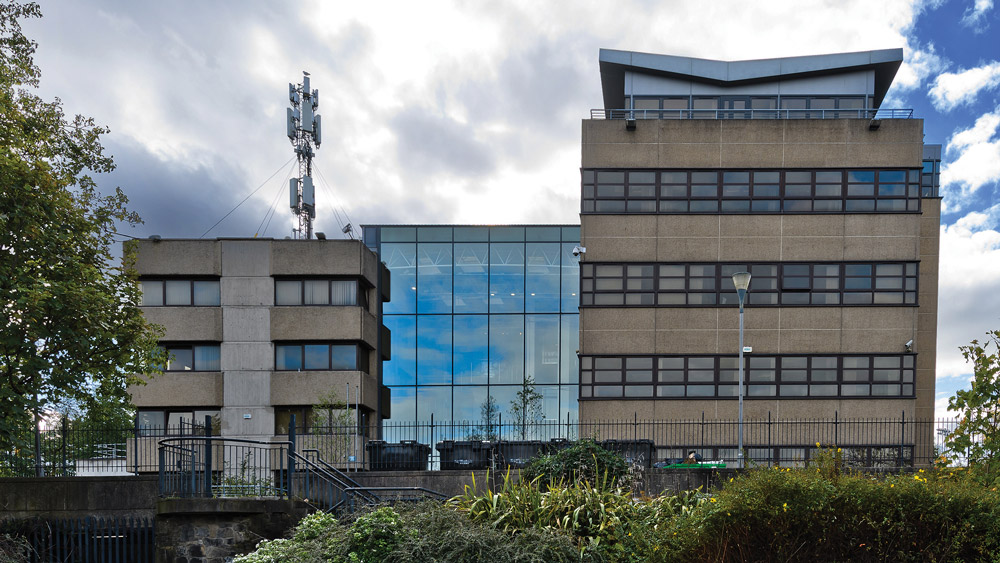 AN OFFICE block, which was refused planning permission for a development of apartments during the summer, is now housing refugees.

The Echo understands 187 single males classed as International Protection (IP), were recently moved into Dolcain House on Monastery Road, Clondalkin, by the Dept of Children.

It is the site of the former head office of SIAC Construction.

Cllr Francis Timmons (Ind) raised the issue at this week’s Clondalkin area meeting, asking if the council were contacted by the Dept or owner, regarding fire certs and safety audits, prior to people moving in.

Speaking to The Echo, Cllr Timmons said he is concerned if the building meets “health and fire safety” standards.

“My understanding is the owners are giving the building to the government rent free for three months, but that it will be a long term arrangement,” he said.

“Planning wasn’t accepted by An Bord Pleanála, yet we are moving in refugees.

“I understand we have a housing and refugee crisis, but this is an office block.”

SDCC said it is “aware” of the situation “which is currently under investigation by this council”.

However, in July, ABP refused permission as it would represent “an inappropriate form of development”.

Cllr Timmons feels the sudden placement of refugees at the building “raises a lot of questions”.

“Either the Dept did or didn’t contact [the council]. I strongly feel there should be a lot more openness and transparency with this.”

The Dept of Children told The Echo that over 11,300 people have arrived in Ireland seeking protection since the beginning of 2022 – in addition to 53,000 Ukranians.

“As of October 9, there are 15,983 people accommodated in the International Protection Accommodation System (IPAS) as a whole. At this point in 2021 there were approximately 7,500 persons in IPAS accommodation,” said the Dept.

Of the 53,000 Ukrainians, over 42,000 are seeking accommodation assistance from the Dept of Children.

“The pressure on the State to accommodate over 58,000 people currently has led to significant shortages particularly for the IP cohort,” said a Dept spokesperson.

“Given the significantly increased numbers of arrivals in the context of accommodation shortages, the Dept has no option but to consider all offers of accommodation… including the use of office buildings, sports facilities and tented structures.

“Emergency centres have been opened in all parts of the country… over 30 accommodation locations utilised since January across 13 counties.”

“The current occupancy in Dolcain House is made up of 187 single males. IPAS does not provide information about the occupants of IPAS accommodation,” said a spokesperson.

The Echo asked about vetting, which the Dept said is a matter for the Dept of Justice “however migrants are not generally vetted, it is not possible for those fleeing war and persecution to be vetted in advance of arrival in Ireland,” they said.

As for the suitability of the building, the Dept said Dolcain House has a full L1 addressable fire detection and alarm system with detector heads in all rooms, and the system was “serviced earlier this year and in good working order”.

“There is a fire consultant in place in the building who is co-operating with the relevant authorities,” said a Dept spokesperson.

The sleeping/living arrangements in Dolcain House include food delivered into the property by the facilities management company, with mobile showers and toilet facilities installed on site.

Emergency beds and sleeping bags have been provided by Dublin City Council.    Each resident receives towels and a sanitary pack of toiletries on arrival.

The facility has wi-fi and laundry facilities, and the management company ensures a janitorial service to include refuse and waste and property upkeep.

There is a licence agreement in place with the provider to utilise the building with options for extension as required.

NEWER POSTMother and Baby Home survivors voice their concerns that many are excluded from redress
OLDER POSTApplications sought to support projects through €100,000 fund