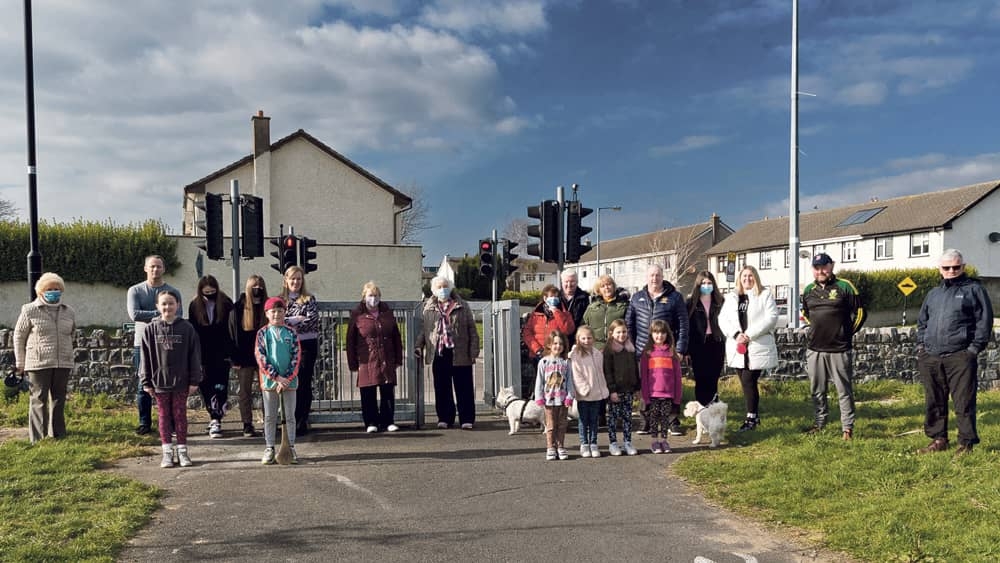 THERE is concern and frustration amongst residents over talks to remove the kissing gates at a local park.

The kissing gates were installed at Dodder Valley Park in 2020 as a preventative measure to keep scrambler bikes out, but some feel that the gates exclude wheelchair users, cyclists, people with mobility scooters and buggies.

Residents protesting over the kissing gates

An unknown person/group took matters into their own hands when two gates were removed at Dodder Valley Mount Carmel and at the Old Bawn entrance. Both gates have been reinstated by the council and the issue was raised with the community Gardai.

A concerned resident of Bawnville, Tallaght, Joe Peggs, says the gates were put in as a solution to the constant problem of scramblers in the park that he had to listen to on a daily basis.

“We had terrible trouble Christmas Day 12 months ago, there was about 13 or 14 people on scramblers, so they put the gate in after that.

“They put in gates and now all of a sudden they want to remove them because the cyclists are giving out that they can’t get their bikes through, but they can get them through alright, it’s just awkward.

“We don’t want them removed because we have been plagued with scramblers. You can see a lot of people, older people walking around the park and its lovely to see them. They should not be avoiding scramblers or avoiding anyone else.

“We had terrible trouble before those gates were in. My neighbour’s daughter almost got knocked over by a scrambler in the park. We can’t have those gates removed, we just can’t.”

Councillor Carly Bailey for Rathfarnham-Templeogue says that she is in favour of looking for alternatives to allow easier access for people into the park.

“First and foremost, I think we do have to acknowledge that there is really a huge and significant problem with scramblers in our parks, there is nobody suggesting for a minute that that isn’t happening.

“The main reason why there is such a problem with this is because the Gardai didn’t feel like they had the necessary legal authority and power to be able to take the scramblers off people in the public parks and there has been calls for legislation at national level to empower the gardai to put a stop to it.

“I know there was a recent announcement in the last few weeks that they are going to put that into action, that’s a big step and it I think that will be a big game changer.

“That in itself proves that kissing gates do not work – they are not actually preventing scramblers from getting into the park, they’re already in the parks.

“I suppose the difficulty I, and others have with the kissing gates is that actually what they are doing is preventing other people from accessing our parks or at least discouraging people from doing so because it can be quite difficult to access through them.

“I live right beside Tymon Park and I have seen it a lot as well, I have seen a mother who is a wheelchair user with a buggy and pram, she had a baby, trying to get through a set of kissing gates. It took her a long time to get into the park and we have to understand and recognise that parks are to be accessed by everybody and we all have a right to be able to access into the lovely green space, especially under restrictions.

“I cycle a lot with my kids and we can’t go through the park to their local school because we encounter four gates in the park, it would take too long to go through the park and the road is not safe enough. I have degenerative disc disease so I can’t lift bikes very easily and up. I know a lot of people can’t do that.

“There are alternatives, it doesn’t have to be kissing gates. The council need to go and seek and find what alternatives will suit in our parks.

“It is not a case of leaving everything wide open, but the reality is, if a scrambler wants to get into a park, they will get in.”

On the other side of the argument, Councillor Teresa Costello for Tallaght Central said that she will fight for the gates to remain at the entrances of the park to keep the scramblers out.

“The day they were installed the park was given back to the community. I walk it regularly and people are out enjoying the park and it’s safe.

“I am really annoyed over it. It is so hard to combat anti-social behaviour at the best of times, but when something is installed, and it actually works and to want to undo it? I just don’t understand it.

“I understand the longer wheelchairs don’t get in and the mobility scooters but in saying that, would they go to a park that is scourged with scramblers anyway? Everyone will be excluded if these preventative measures are removed.

“I will be fighting tooth and nail against anyone that suggests removing the kissing gates because it is something I have no interest in tolerating at all.”

Volunteer Chair of Tallaght Community Council (TCC) Liz Kennedy said: “TCC have for decades pushed for Dodder Valley Park to be developed as a park amenity for the community. It is an urban park, and vital to thousands during Covid. It’s nearest neighbours must be consulted as well as park users, so it is seen as an asset on their doorsteps, not a nuisance. Often local people have the greatest insights to offer from a design and usage perspective, that shouldn’t be ignored. One size won’t always fit all. Safety is key as a foundation for all community facilities.”

Sinead Tighe, Inclusion Officer with TCC commented: “Our parks are shared spaces for the community. A good park will appeal to all ages, from 9 to 90 to visit it and use it regularly. We push for equality of accessibility and use wherever possible in community amenities to ensure the greatest community benefit and use.

“I see 3 core principles that need to be given consideration here – safety for all in and around the park, pragmatic accessibility solutions where possible, as well as safe space for mobility and exercise for all ages and abilities.”