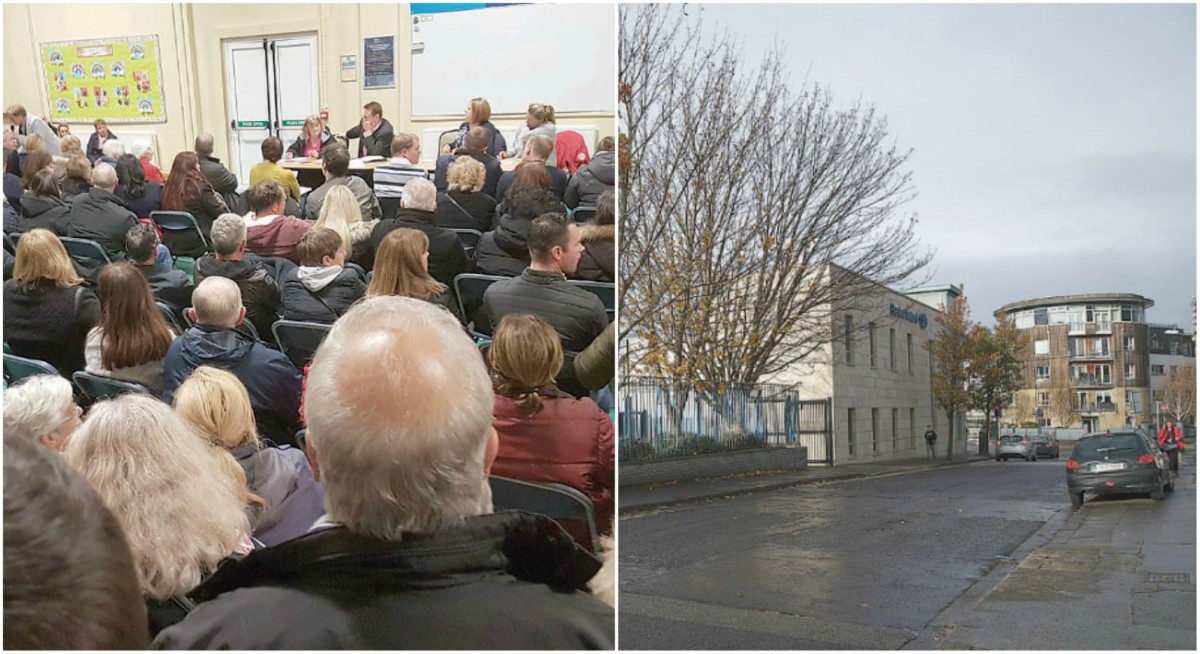 TO SAY the proposed homeless hub in Walkinstown has generated a mild response in the community, would be a massive understatement.

Two public meetings on Monday and Tuesday last week were packed to the rafters with residents.

The first meeting at Drimnagh Castle Primary School on Monday evening, got so heated at one point, it looked as if a row might break out between a resident and a councillor who intervened to calm things down.

Residents are angry at the lack of consultation from Dublin City Council, over a new homeless hub at the former Bank of Ireland building in Walkinstown, which is set to open on December 18.

The hub will house approximately 40 singles or couples, according to Eileen Gleeson, head of the Dublin Regional Homeless Executive (DRHE), who have leased the Balfe Road premises for a period of 18 months.

The facility is targeted towards homeless persons currently living on the streets, who have engaged with homeless services over the last three months.

At Drimnagh Castle primary school on Monday, the biggest round of applause was in response to one resident’s concern that “we don’t want junkies in the area”.

Another resident said his experience with homeless people was that his city centre business was set on fire, he was constantly picking up syringes outside the premises, and he was burgled six times.

Other concerns amongst residents surround the health and safety standards of the former bank building, and that the needs of 40 homeless people “shouldn’t supersede the people who live here and pay their mortgages.”

Monday’s meeting was chaired by Walkinstown Residents Association, and included a solicitor familiar with the Carmen Hall case in the Liberties – a proposed emergency shelter successfully challenged by residents in the High Court.

The solicitor acknowledged Carmen Hall was different as it was found that the city council had breached its own development plan, and said “no High Court judge is going to scrap a homeless hub before Christmas.”

He encouraged residents to engage with their local councillors and the city council, and said a costly legal challenge, even if it was going well, would still see the facility opened.

On Tuesday at the policing forum in the WSAF hall at Moeran Road, a large part of the meeting focussed on the hub.

A representative from Dublin City Council was present at this meeting, unlike Monday, but details of who will be running the facility have yet to be announced.

A chief concern for residents is who the tenants are, what their background is, and if it will lead to anti-social problems.

“It’s opening 20 days from now and we have no idea who they are and who is running the place,” said a resident at Tuesday’s meeting, while another resident quipped that Stepaside Garda Station was available.

According to the DRHE, there will be no queuing for admission or congregating on the street outside or in the immediate vicinity of the Walkinstown hub.

Speaking at the recent area committee meeting in DCC, Ms Gleeson said hub tenants will be engaged in a wraparound service, and eventually moved to permanent accommodation.