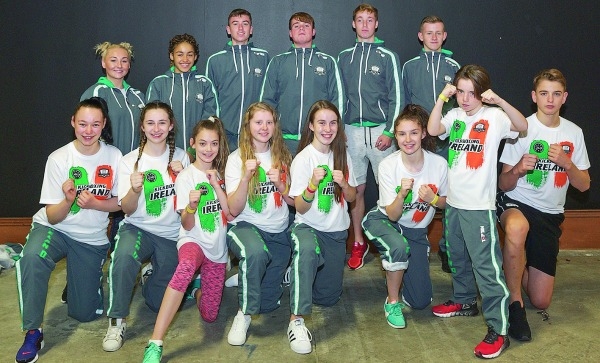 TALLAGHT Martial Arts have every reason to be pleased with their return from the WAKO World Cadet and Junior Kickboxing Championships in Citywest last week.

With a handful of their members making the podium, they went a long way to helping the host nation finish second out of 45 countries on the medals table.

Indeed overall, Ireland recorded a haul of 22 gold, 25 silver and 29 bronze- a tally that was beaten only by the Russians with Italy in third.

Troy Gannon led the drive to the podium for the club in this competition, which involved more than 3500 competitors, taking gold in the Older Cadets (13-15 Years) -57kg Light Contact, silver in Points Fighting and bronze in the team event.

His run to the Light Contact Final saw him account for Lukas Jurisic of Croatia, Hungary’s Bence Kajtar and Great Britain’s Kameron Doyle-Bains.

And in the decider against another Hungarian opponent, Akos Bolfan, the young fighter from Fettercairn continued with his tactic of side-stepping and counter-punching, and it proved successful in seeing him take the final step on the road to the world title.

In the Points Fighting section, Gannon surmounted the challenge of Italy’s Parisi Lorenzo, Hungary’s Roland Viczian and Callum Hollinshead of Great Britain to secure his place in the final.

Here he found himself back up against Doyle-Bains from Great Britain and it was to prove a thrilling match-up as both contestants were deadlocked 7-7 at the end of two rounds.

After a minute of extra time the fight was still level at eight points apiece, meaning the first person to score would win the world title, and it was Bains who carded the crucial hit.

Gannon’s clubmate Eadaoin McCrave also went top of the podium when she lined out in the -60kg Older Cadets Light Contact division.

Victory over Aspasia Armakola from Greece marked her first step on the road to gold, the TMA fighter winning out 3-0.

She dominated her next contest from start to finish against Sarah Salonova from Slovakia to secure her place in the last four where her superior kicking skills saw her past Francesca Oliverio of Italy.

In the final she came up against Carla De Wet from South Africa and maintained her poise to take the fight on all three judge’s cards and, with it, the world gold.

Jodie Browne, a bronze medallist in team competition over the week, picked up silver in the Older Cadets -60kg Points Fighting event which she started with a clear ten-point victory over Isobelle Padilla of Australia.

That was followed up with wins over Austria’s Anesa Trle and Dumlao Alyssa of the USA before she came up against Hannah Weatherly of Great Britain in the title fight.

In what was another nailbiting showdown, the two contestants were point-for-point right the way through, Weatherly taking the lead in the dying seconds to win out by the narrowest of margins.

There was a runner-up finish also for Kellie Morgan in the Older Cadets -65kg division as she despatched Hungary’s Dora Rorok and the USA’s Kaliyha Sunga before losing out to Lorena Jurisic of Croatia in a very tight contest after which the TMA competitor also took bronze in the team event.

Lauren O’Keeffe, fighting in the Younger Cadets +47kg and her first WAKO Championship, showed no sign of nerves as she won bronze, beating Lorena Gazilj from Croatia and Mexico’s Paola Carrillo Ramirez, only to be edged out by Italy’s Martina Sartorato.

Conor McGlinchey, fighting in the -74kg Junior section, turned in a fantastic performance to win silver after having received an accidental blow to the nose in the final.

He made it that far after overcoming the challenge of Prodromos Papadopoulos from Greece, South Africa’s Keagan Rowe, Payne Alonzo of the USA and Mexico’s Hector Bustos Solorio, the last two wins coming after he registered last ditch scores.

He made a blistering start to his final against Brandon Prince of Great Britain racing six points clear, but after being accidentally caught in the face by Prince’s forearm, he began to see the gap close.

After three rounds it was all square leading to one-minute of extra time, during with the British fight edged ahead to clinch the win.

There was bronze for Adam Smith in the -84kg Junior division after hecarded a win over Italy’s Nicolo Gavioli before being pipped by Bulgaria’s Sider Ivanov in extra time of their semi final.

Nicole Bannon also performed well making it as far as the last eight in both the -65kg Points Fighting and Light contact while Leá Farrell, Rebecca Kelch and Tola Adebisi together with Luke Smith, Adam Condon, Nathan Kelly and Zara Jones produced some impressive displays too.

Delighted with the performance of his squad, Tallaght MA coach Martin Bannon said “these young athletes put in such hard work in training over the last number of months, training six days a week and attending three training camps over the summer months in preparation for the World Championship.”

Next up for TMA students will be the Tallaght Open in Tallaght Community School on Sunday September 18.