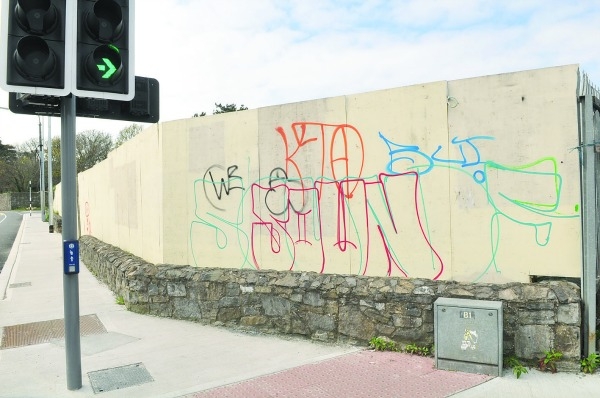 Graffiti continues to be a major problem in Tallaght village

A DELAY in removing graffiti by South Dublin County Council could be a contributing factor to Tallaght Village’s unwelcomed urban make-over in recent weeks.

As in all communities, the surfaces in Tallaght village are regularly branded with tags, slogans and spray-painted images.

However, in recent weeks, those living and working in the village have reported an increase in the level of graffiti – which many believe is destroying the compact and historic village area.

One woman who works in the village told The Echo: “There is a serious issue with graffiti in and around the village, nearly every surface is vandalised.

“The side of the priory has been done, apartment blocks, the former Esso site, it’s everywhere.

“This is not art, it’s just people spray-painting their name – and in one instance I saw a young man in broad daylight spray painting an advertisement on a hoarding in the village.”

She added: “I have rung the council and they are taking no responsibility for clearing this up.

“These people are defacing public property and the council needs to take action.”

When contacted by The Echo, Mary Maguire, Senior Executive Officer with the council’s Environment, Water and Climate Change department, said that “regrettably” there was a delay in removing some graffiti in recent times due to the “non-availability of required chemicals”.

She added: “Graffiti is a major problem across South Dublin County.

“It is a criminal offence to deface property and it is a requirement of the Litter Pollution Act 1997 for property owners to remedy any such defacement.

“All reports of graffiti are investigated by the Litter Warden Service, who ascertain the extent and nature of the graffiti, and also verify the ownership of the defaced property.

“If the area in question is in the ownership of one of the utility companies which have a Memorandum of Understanding agreement with the council, a referral is made to the company involved.

Ms Maguire also stressed that the local authority does engage in pro-active environmental projects, including the removal of graffiti.

A senior Garda source told The Echo that graffiti is “criminal damage” and that arrests have been made in the area in the past.