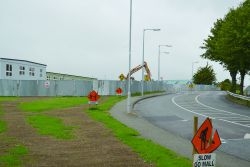 Green space being transformed into a new two-school campus

THE construction of temporary accommodation for two local schools is on track for September, The Echo can confirm.

The Portacabins, which lie in a green space off the Killininny Road in Firhouse, will be home to Educate Together Firhouse and Gaelscoil na Giuise – two new schools which have been based in local community centres since opening their doors two years ago.

The green space, which was sold to the Department of Education by South Dublin County Council, is currently being transformed into a two-school campus – consisting of two single-storey prefab units complete with four classrooms each and ancillary accommodation.
The prefabs can be located on the site for a period of up to four years, after which a commitment of permanent accom-modation has been made by the Department of Education.
The Department has told The Echo that construction work will “enable” both schools to open for September 2015.
The location for these two schools generated much debate over the past three years, with a number of local councillors and residents voicing their support for the schools, but not the chosen location.
Despite a number of alternative sites in the surrounding area being identified by councillors, petitions submitted to the local authority and hours of debate, the decision to build the new campus on the Killininny Road site got the green light.
In a statement earlier this year, Gaelscoil na Giuise said: “We are acutely aware of the sensitivities around the site that has been chosen, for some people in our community.
“We are happy to do our part to engage with and support our neighbours in Firhouse Carmel FC, Firhouse Community Centre, and all residents from across the entire Firhouse area.
“We look forward to fostering great relationships.”