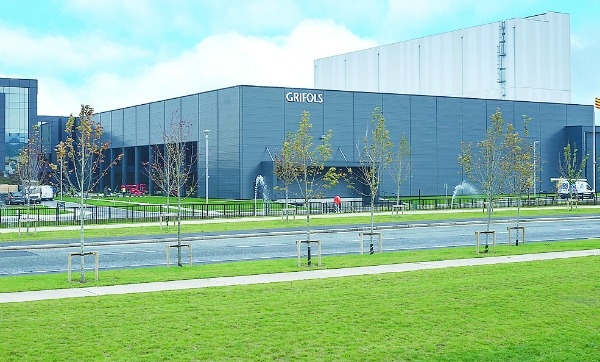 Last year the Spanish bio-pharma global firm announced the creation 140 jobs and the opening of its new bioscience division with the proposed expansion.

The 20,000sq m facility will act as a central warehouse for all plasma coming from the USA and has the capacity to store up to 1,150 pallets of plasma at -30 degrees centigrade.

It will centralise decision-making with regard to commercial policy, and house the company’s regulatory and quality activities, R&D global management office and other administrative and commercial activities.

The investment in Grange Castle is part of Grifols’ growth strategy focused on internationalisation and globalisation of its activities.

The firm relocated decision-making with regard to bioscience and it’s treasury function to Ireland in 2014.

Grifols run a network of plasma donor centres in the USA, which are then moved to other facilities in the USA and Spain, before being transformed into 26 different types of plasma-derived products.

These products are shipped to 67 countries.

The bioscience division generates sales revenue of €2,513 million in 2014 or 75 per cent of the group’s total net revenue.

Speaking at the opening of the facility last year, Minister for Justice Frances Fitzgerald said the investment will “provide a boost” to the local economy and confirms Grange Castle as one of “Europe’s leading hubs for innovation-led industry.”

Development fees of €1,224,000 shall be paid to the planning authority as part of the conditions contained within the planning permission.