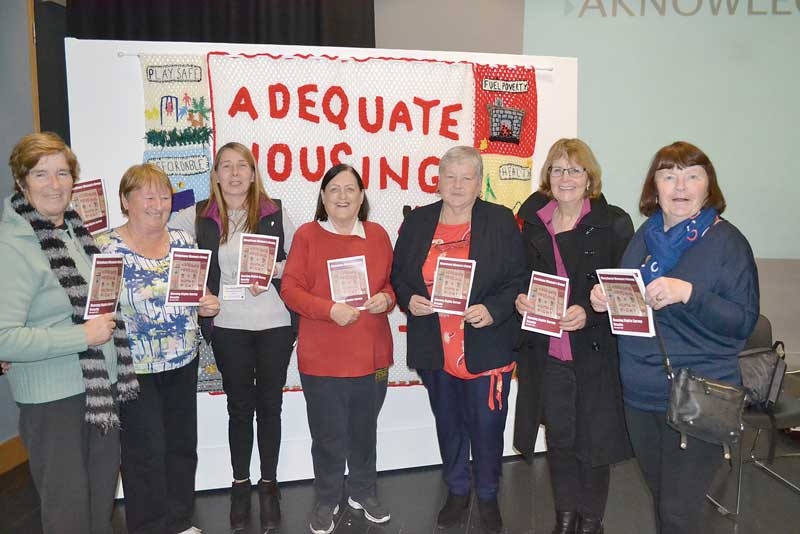 MORE than half of the 94 households questioned in a Glenshane housing survey said their home was not warm enough for their family this year, despite 87 per cent paying above the national average on heating bills.

The Glenshane’s Women’s Group this week launched the results of their Adequate Housing Survey, which saw 94 households in the estate questioned on the condition of their accommodation.

The survey interviewed 94 households who live across a range of accommodation types – 83 per cent in council properties, 12 per cent owner, three per cent private landlord and two per cent in housing association units.

When discussing the unsuitability of their homes, 28 per cent highlighted damp and cold conditions as a reason, 36 per cent said there was not enough room for their children while 44 per cent cited ‘overcrowded’.

Of the 94 households surveyed, 75 per cent had people living in the property who are homeless – a percentage which equates to 70 adults and 63 children staying with friends and family due to homelessness at the time of the survey.

Home heating also came up as an issue, with 51 per cent of respondents stating that their homes were not warm enough for their families over the past year.

The survey also revealed how 87 per cent of the 94 households are paying above the national average for heating, which is believed to be connected to substandard windows and doors and poor insulation.

On Tuesday, December 12, the results of the survey was officially launched in Rua Red by the Glenshane’s Women’s Group.

Speaking with The Echo on behalf of the group, Alice Kelly said: “We were very disappointed with the turn-out from South Dublin County Council.

“Only four councillors turned-up, Brian Leech, Martina Genockey, Emma Hendrick and Charlie O’ Connor . . . there was nobody from the council management.

“It was very frustrating. We worked very hard on this survey and the community engaged with it, but nobody wants to hear.”

She added: “We are sure that these results are reflected across the rest of the [Glenshane] estate.

“It would be nice to see South Dublin County Council do something about the survey.

“We’re not asking for a lot, just that our homes are brought up to standard.

“We do feel that Glenshane is being neglected . . . and we will be sending this survey to all of our TDs and building a campaign [for adequate housing].”

The project was originally started by community worker Ann Fitzpatrick who sadly passed away earlier this year.

“Ann was a very dedicated, compassionate and caring person, and we finished this survey in her memory,” Alice said.

She added that Ann’s loss to the community “has been immense” and that they will continue her work in promoting adequate housing as a human right.