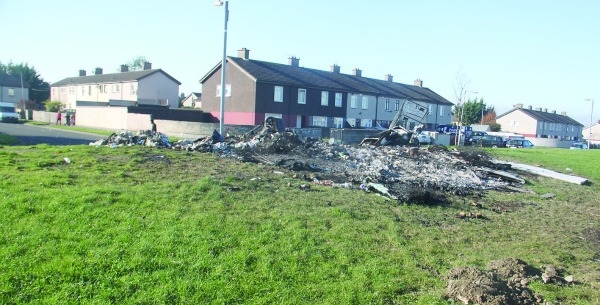 SOUTH Dublin County Council has this week been left with a frightening reminder of Halloween, as its crews start to ‘map’ all of the bonfires across the county.

Last year, 348 bonfires were lit on public spaces across the county, which cost the council in excess of €50,000 in clean-up costs.

When contacted by The Echo this week, the council said: “It’s too soon to put a definitive figure on the number of fires [for this year].

“As in previous years, mapping of all bonfires in the county has commenced.

“The mapping of the bonfires provides a range of information and is used to inform the clean-up process.

It is expected, based on previous years, that it will take approximately four to five days to map all of the bonfires which took place in the parks and open spaces in the county on Halloween.

“Once the mapping has been completed, the clean-ups will be scheduled and again, based on experience, it will take between three to four weeks to clean the entire county of all bonfire debris.”

Prior to Halloween, council depots – alongside local gardaí – were pro-active in removing debris and offering alternative activities to bonfires in local libraries and through schemes such as Bulbs not Bonfires.

Tallaght Superintendent Peter Duff told The Echo: “We were definitely more pro-active this year before Halloween . On the day itself we had one super-intendent working, two inspectors, five sergeants and 25 gardaí – who were working from 4pm to 4am.

“We were on the ground patrolling areas, with support from the traffic unit and we had one garda public order van at the station as well – which wasn’t needed.

“We were busy and had lots of calls but there was no arrests and any of the public order offences were dealt with quickly.

“A bonfire in Aylesbury and one near Springfield did get a little out of hand due to young people consuming large quantities of alcohol, but we managed to bring these under control quite quickly with no aggravation– but we did confiscate a lot of drink.”

He added: “We made no arrests in relation to bonfires or Halloween and I think being pro-active in the lead-up to Halloween helped ensure there were no serious incidents.

“In saying that, a few wheelie bins were set on fire and a car was burnt out in Killinarden – which can be very scary for residents.

“However, overall there were no injuries or serious incidents leading to arrests.”