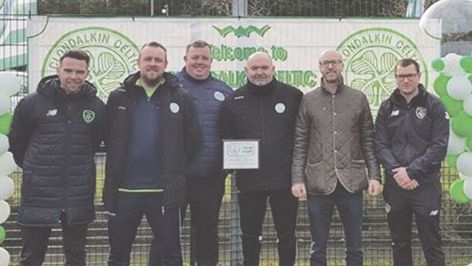 CLONDALKIN Celtic are now one of only 28 clubs in the country to receive the FAI Club Mark Award.

The award is based on best practice in the governance, management and administration of a football club, and it is completed on a step-by-step basis with the FAI.

Last year, Clondalkin Celtic played their first match in St Cuthbert’s Park, an important milestone following years of hard work by members in their efforts to re-establish soccer in Bawnogue.

The club received the award last week and called it a “proud” moment in a social media post.

“It is down to the hard work over the last two years by our club development officer Paul Brennan who has made sure every coach has all their qualifications and their coaching badges.

“Big ‘well done’ to all our coaches and especially all the kids who are there week in week out in all weathers. Onwards and Upwards.”

Cllr Eoin O’Broin said: “It is a kind of quality mark saying that all of their trainers are (1) garda vetted, (2) child protection training and (3) have done soccer coaching training.”

“Well done to everyone in the club and particularly all involved in the process.”