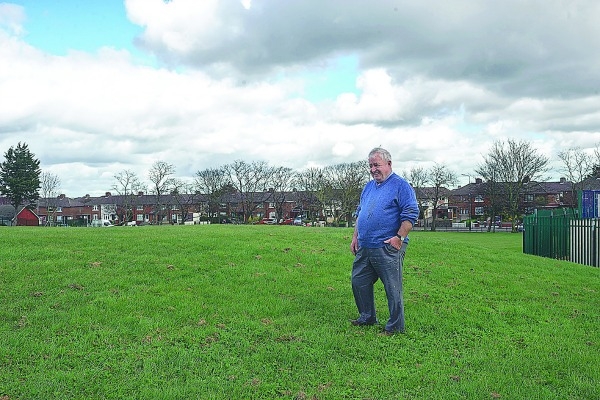 Hidden graveyard ‘shamefully covered over during the 1970s’

THE historical signifigance of Le Fanu Park was brought to light this week, with calls for Dublin City Council to identify an unmarked graveyard in the park.

One Ballyfermot pensioner that The Echo spoke to, has a sister who was buried at the hidden history cemetery in 1936.

Not many passing by would know a graveyard existed at the corner of the park, located on a hill close to the junction of Le Fanu Road and Raheen Park.

Drumfinn Avenue resident Paddy Wall (76) grew up in his formative years in a cottage directly opposite St Matthew’s Church on Blackditch Drive.

Paddy was born in 1940, after the death of his sister, but would like to see something done to commemorate the cemetery, which he says was “small, surrounded by rocks, and had the ruins of a church in the middle.”

Independent councillor Vincent Jackson says the cemetery was “shamefully covered over in the 1970s.” At a recent Dublin South Central ACM, Cllr Jackson asked the local authority to “indicate the location and names of those buried in the cemetery in Lawns Park” with a cross and a plaque.

In response, the council parks department said they “do not have information on individuals buried in the old cemetery in Le Fanu Park” but guidelines for memorials in parks “allow for commemorative benches and trees.”

Mr Wall, believes the Catholic Church should have records and death certificates, including that of his sister, who was stillborn.

“A plaque would be a great idea,” said Mr Wall.

“My only worry is that I could see it being vandalised – people have no respect nowadays.”

He continued: “Teachers today tell kids they have rights, but what they fail to tell them is, your rights are only applicable, if you respect other people’s rights. The only way to hurt them is in the pocket.”

Paddy grew up in a time when the only homes in the area were small enclaves of cottages, spread around Ballyfermot and Palmerstown.

A walking, talking local history guide, and passionate about world history, Paddy talked of his fondness for the local farms (his father was a dairy boy), and his mother would “skin, boil or roast” rabbits that he had caught in the land.

He recalls only one local pub, in Chapelizod, and the nearest church with a “beautiful marble altar” being in Palmerstown, where he went to school.

Paddy worked in the paper mills in Raheen from the age of 17 to 30, before working for Dublin Corporation until his retirement eight years ago.

“I’d go back to work tomorrow if I could – I miss the craic” he said.

His parents Christy and Brigitte moved to Drumfinn, where Paddy subsequently raised his own family.

Dublin City Council said options for a memorial can be considered and discussed at the next parks management committee meeting.