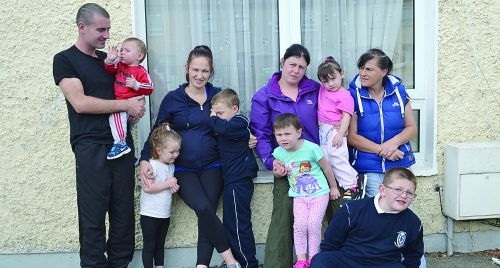 TEN people are living in cramped conditions in a house in Tallaght, a situation which, mirrored across many communities, has shone a light on another consequence of the housing crisis – severe over-crowding.

Much of the conversation surrounding the housing crisis is focused on homeless families living in emergency accommodation or at risk of living on the streets.

However, there is a hidden homelessness which sees entire families living in one bedroom or sleeping on a friend’s sitting-room floor, with three generations of one Tallaght family currently living in cramped conditions in Killinarden.

Sean Cullen and his wife Jacinta Warner have been living in the front bedroom of Jacinta’s mother’s three-bed council house in Killinarden for the past two years with their three young children.

Jacinta’s pregnant sister Lana also had to move back home and is currently living in the box-room with her two children, while her mother Paula sleeps in the third bedroom with her epileptic eight-year-old son.

Sean, who is working on a CE scheme, told The Echo: “We were living in private rented accom-modation but the landlord put the rent up and, while we tried to pay the extra, our rent allowance just wouldn’t cover it.

“We left to find somewhere more afford-able, but couldn’t find a landlord that would accept rent allowance.
“The same happened to Jacinta’s sister Lana, which has resulted in the ten of us living in one house for the past two years.”

Sean, who has been on the housing list for the past six years, added: “We have tried everything, we’re constantly in communi-cation with the council and local politicians but they don’t even reply to our calls.

“We’ve tried to get a house through a number of different housing schemes but no luck, and we even suggested to the council that we’d take a boarded-up house and fix it ourselves, but no luck there either.

“It’s very strenuous on family life living in cramped conditions like this and we know that we are not the only family locally that has been forced to live like this.

“Just because we’re not actually homeless the council thinks it can just forget about us, even though our quality of life is massively impacted upon.”

Lana, who is due a baby in 10 weeks, said: “The wellbeing of families matters too and there are health and safety issues associated with 10 people and a new baby living in a small council house with one bathroom.
“There are families even more cramped than us, but the Government just doesn’t care.

“Once we’re not actually homeless they can wipe their hands of us – the conditions that people are being left to live in is not a priority for them.”

AAA councillor Kieran Mahon told The Echo: “Overcrowding is one consequence of the housing emergency.

“Rents are rising and at the same time rent allowance has been cut. The deposit needed to buy private houses are just out of reach for most people.”

He added: “We have a young working family here with no access to a home. In effect, as a family, they are homeless. “The option is severe overcrowding or actual homelessness. That is the reality.

“This needs an immediate response from government with NAMA properties handed over to the local authorities, a cap on private rents and an end to evictions.

“Local authorities must be funded for a substantial home-building and maintenance programme, including taking control of unused landbanks and empty private houses.”

Cllr McMahon also added that AAA is advising people not to leave rented accommodation if they have nowhere else to go.

When contacted by The Echo, South Dublin County Council said that both families would “not be considered as homeless specifically”, adding: “Each case is looked at on details of the case and in accordance with the Allocation Scheme and directives and guidelines issued by the Minister.”

The council did not respond to The Echo question concerning any health and safety risks associated with ten people living in one of their council homes.